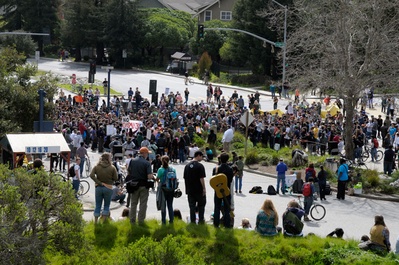 The base of the UCSC campus during the statewide education protests on March 4, 2010

2010 saw dramatic cuts to the California State Budget, which had major impacts on universities and community colleges locally. Students organized in a variety of ways to make a statement, and this page represents the activity of students getting their messages out on social media websites at that time. Many of these links are outdated, but some are still active. 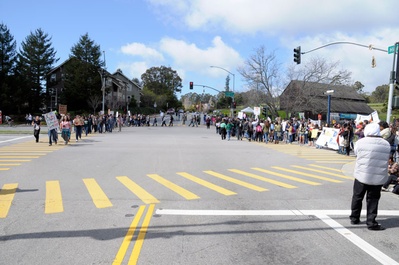 The intersection of Bay Street and High Street on March 4, 2010

The entrance to campus as a walkway

2011-04-17 00:23:28   May 1, 2010 Protesters at a May Day rally at the town clock in Downtown Santa Cruz marched into the downtown are and vandalized at least 15 buildings. Breaking windows, writing graffiti, and setting a fire on the porch of a coffee shop. —Harlan