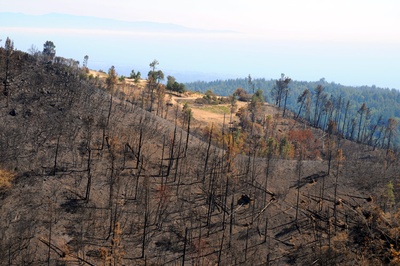 A view from Summit Road three weeks after the fire.

Two very dry Winter seasons in a row, and unusually high winds were factors that contributed to the county's worst fire, in some locals' estimates, in 100 years. At around 5:30 in the morning on May 22, 2008, fire broke out in the Santa Cruz Mountains between The Summit area and the town of Corralitos. Mandatory evacuations of 350 people were made at Lower Highland, Buzzard Lagoon Road, Vaca del Sol, Upper Browns Valley and Avocado, Hazel Dell, Redwood Road/Browns Valley Road, in addition to 1300 voluntary evacuations. Roads closed included Summit Road east of Soquel San Jose Road; Corralitos Road, Hames Road, Eureka Canyon Road, Poleline Road at Highway 152, Corralitos Road at Varney, Mount Madonna Road at Hazel Dell and Highland Way at Mount Bache. 3100 acres burned the first day, with about 15 structures destroyed, and by the end of that day firefighters had the fire 5% contained. By the next morning officials estimated the fire was 20% contained due to a cool, foggy, and much less windy evening. The fire was 100% contained at 6pm on May 27, the sixth day of the blaze. By that time 2,519 fire fighters in 91 crews had pitched in to help, some of them from out of state even. 4200 acres burned and 132 structures were destroyed. There were no human fatalities and the only injuries during the event were some minor sprains to fire fighters. There were many animal deaths and injuries, however. The fire fighting efforts cost 12.2 million dollars up to that point. The exact location where the fire started was found to be an empty lot in the forest along Summit Road, before Maymen's Flat, at mile marker 7.53. In April of 2009 a Los Gatos contractor, hired by the owner of the lot, was arrested for allegedly triggering the blaze as he was doing work clearing brush. For several days, the area outside of Corralitos Market & Sausage Company served as a gathering spot for displaced residents hoping to find information on when they could return to their homes. The Summit Fire was the first of three large fires that took place locally in 2008; it was followed by the Martin Fire in Bonny Doon and the Trabing Fire off of Highway 1. 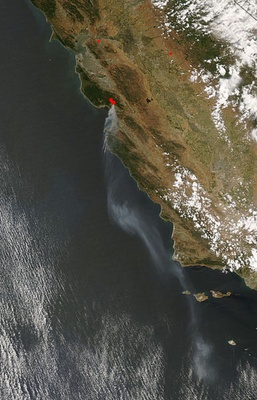 A NASA photo of the smoke's path on May 22

The fire region on on May 23