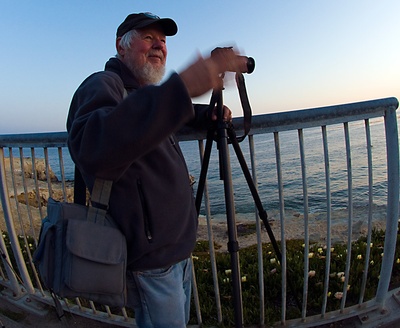 Ted Orland is a local photographer and writer who exhibits his artwork nationally. Orland received a degree in Industrial Design from USC in 1963. In 1966 he attended a workshop in Yosemite with photographer Ansel Adams, and returned the following year as his assistant and later as an Instructor at Adams' workshops. In 1975 Orland received a Master's degree in Interdisciplinary Creative Arts from S.F. State University. Orland began his career as a photographer shooting subjects in a similar fashion to those of Adams. As his own style evolved, he moved from straight large format nature photography to hand-painted black and white photographs covering a much wider range of subject matter, and for many years used a small plastic Holga "toy" camera. He also used digital and computer equipment for photography early on in the technology's evolution. It is now known he took the first computer based photographic images of Yosemite in the early 1980s. Orland's subjects range from idyllic scenes of tranquil nature to surreal explosions of humorous human activity, and he tends to manipulate his subjects heavily in Photoshop to achieve a variety effects, some often very subtle graphically.