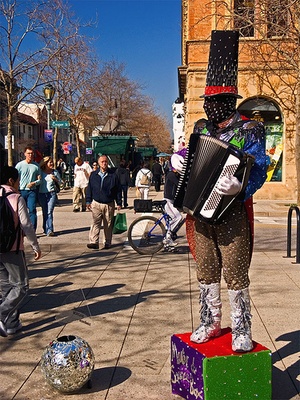 The Great Morgani, aka Frank Lima, is a long time Santa Cruz street performer and Town Character. He plays the accordion and dresses in homemade, seasonally relevant costumes. He usually works the east side of Pacific on the El Palomar Block. He also has a website, and a book, The Great Morgani: The Creative Madness of a Middle-Aged Stock Broker Turned Street Musician.

In February 2014 he made this announcement:

"After 17 years of entertaining/performing, downtown Santa Cruz, "THE GREAT MORGANI", has lost his "GREATNESS" status. Due to the recent strict enforcement of current ordinances, I am considered in violation of where I have performed for the past 10 years, even with written permission from the business owners. During these years, I have never been confronted by the police, downtown association, downtown hosts, business owners, or even city council members and mayors. The alternative performance areas, are so constrained and rigid, that they are not compatible to any type of performance. Rather than accept a hefty $300 ticket, or worse yet, spend a night in jail. In one of my costumes?  I'll be quietly leaving the downtown scene. Thank you, EVERYONE, for you support and smiles, along the years. I will miss you all. .............The "GREAT ONE" has left the avenue."