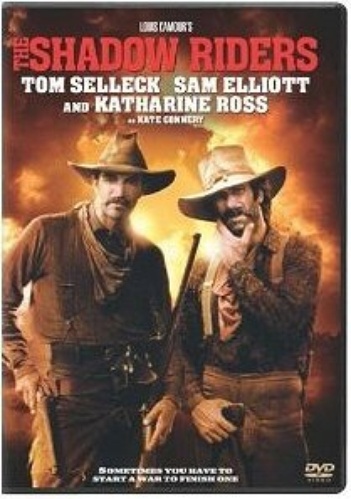 From the DVD cover.

The Shadow Riders is based on the book by that name by western author, Louis L'Amour.

Two brothers Mac (Tom Selleck) and Dal (Sam Elliott) Traven, fought on opposite sides of the Civil War, but meet up just as the war has ended. They go home to Texas and discover renegades have kidnapped the third brother, two sisters and Dan's girlfriend. The brothers go after the renegades.

Overall Effects of the Film Locally

According to an article by Rick Chatenever, in the Santa Cruz Sentinel, for June 8, 1982, (page 11) titled "Sorry, Girls, No Tom Selleck" few of the actors were actually in Santa Cruz County. Tom Selleck was not in the county. This didn't prevent rumors of sightings claiming to see him. Even after the film crew left, it was a great time to be a tall guy with a mustache in a bar in Santa Cruz.

Many of the radio stations read the press release without correcting the typo. They virtually all said "The story takes place in 1863 after the Civil War." The Civil war ended in 1865.