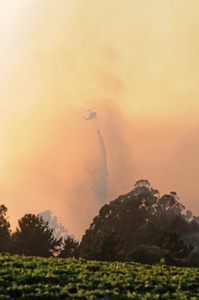 At about 2pm on June 20, 2008, fire broke out in several locations next to the northbound side of Highway 1, between Airport Boulevard and Mar Monte Avenue. On a day of record 100 degree temperatures in the area, the fire grew to 500 acres in size in a few hours. The fires were located in an overall area of 1000 acres, between Mar Monte Avenue, White Road, Calabasas Road and Buena Vista Drive in Larkin Valley. Highway 1 was closed in both directions for a short period of time. The southbound lane was then opened while the fire burned visibly near it, but the northbound lane remained closed until midnight. 2000 people were evacuated, and evacuation centers were set up at Aptos High School and the Watsonville Fairgrounds. Particularly hard hit was Trabing Road, where multiple houses were lost due to its proximity to Highway 1. By the end of the day, firefighters had the blaze 50% contained and fire officials estimated that 15 homes had burned on Trabing Road and on Grizzly Oaks. The fire would eventually destroy 26 homes and 49 outbuildings, and its area totaled 630 acres. This fire was called the Trabing Fire or the Watsonville Fire and was the third major fire (following the Summit Fire and the Martin Fire) to hit Santa Cruz County in the beginning of an unusually early red flag fire season. 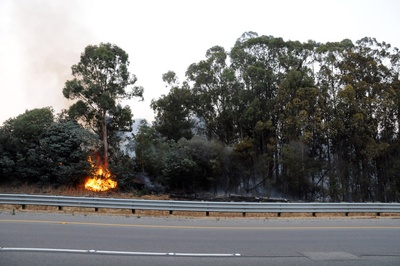 The fire, burning next to Highway 1