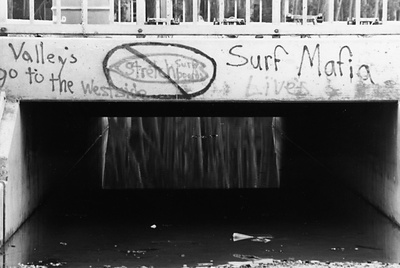 Graffiti directing 'valleys' to go to the westside. This is a jab at valleys as well as an eastside jab at the westside. Photo: 26th Avenue Beach, early 1980s.

Valley go home was a common territorial phrase used locally in the 1970s and 1980s. Locals used the term valleys to refer to people from San Jose, the Santa Clara Valley, and beyond who would travel to Santa Cruz and increase congestion at a variety of locales, but the term was primarily used in reference to the use of the beach areas. The phrase "valley go home" was both verbally declared and written as graffiti, and valley would sometimes be used to refer to people who were from Scotts Valley and the San Lorenzo Valley as well. Valleys were identified by locals by the way they dressed, the cars they drove, and a variety of other behaviors and mannerisms, often defined in the moment. 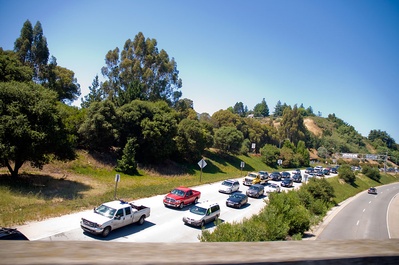 The term valley has for the most part faded from use, but varieties of territorialism still exist on the westside and the eastside of Santa Cruz, as do more specific terrritorial issues relating to specific neighborhoods and their relationship to individual surf spots. Anti-tourist sentiments may also have declined over the years. Locals have always felt somewhat ambivalent about tourism, but the current political leaders in Santa Cruz rely on the mantra that business expansion is essential to the growth of local government and the expansion of services.

The term valley and the phrase valley go home were also used in Southern California and matched to their specific locales. A 1979 episode of the television show CHiPs was titled Valley Go Home!, and the plot revolved around a parking dispute between a group of surfers and a group of valleys.1