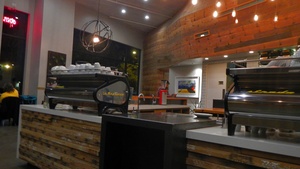 In April 2018, a barista at the Seabright location described it as "basically a showroom" for their coffee roasting operations. According to the barista, approximately 1,200 lbs of coffee are roasted per week on the premises.

Since their opening in 2007 on 41st Avenue, Verve Coffee Roasters has expanded their business with retail establishments in San Francisco (1), Los Angeles (3), and Japan (3). *The number in parentheses represents the number of retail locations as of April 2018, according to the company's website.