Washington Street, in Santa Cruz, is one-way going south for one block. 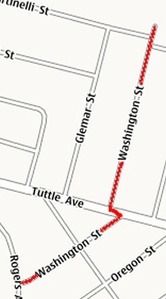 Washington Street in Watsonville has a jog on Tuttle Avenie.

Traffic is light. There are no bike lanes. Area is residential.

None. Area is residential.