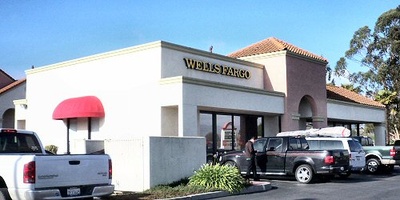 Pajaro Plaza location in Watsonville. This was previously a branch of Coast Commercial Bank. Photo: January 2010.

Wells Fargo was founded in New York, NY in 1852 as an express company and a bank. During the financial panic of 1855 Well Fargo survived other banks in California because it kept enough assets on hand, instead of sending them eastward to the headquarters. Wells Fargo is now the oldest continuing bank in California.

The company quit the shipping business during World War I. Since then, another company started using the name of Well Fargo for armored car service and licensing the name to other ventures such as smoke detectors. The two companies are not related.

Wells Fargo has bought the assets of many finance institutions. Among those within Santa Cruz County; Crocker Bank in 1986, First Interstate Bank in 1996, Coast Commercial Bank in 2008, and Wachovia in 2008. Since Well Fargo already has a strong presence in Santa Cruz County, the real estate of the acquired buildings were often sold.

When Well Fargo bought Wachovia in 2008, the three branches were within walking distance of a Wells Fargo branch and were not needed. The Downtown Wachovia branch was sold to Bank of the West. The 41st Avenue branch and the Aptos Branch were closed and became a dentist office and a real estate office respectively.

In the case of Coast Commercial Bank, the Pajaro Plaza location in Watsonville, Mt. Hermon Road, and the Soquel Drive locations became Wells Fargo branches. The branch at 75 River Street was closed because there was already a Well Fargo branch across the street. Before the Soquel Drive building was a Coast Commercial Bank, it was a vacant lot. Prior to a vacant lot it was a Shell service station.

The Wells Fargo Mortgage office on Front Street in Santa Cruz, was once a branch of Monterey Savings. When the parent company of Monterey Savings was bought by Home Savings of America, several of the branches were sold by the new owners.

The Main Street office in Watsonville has been used by Well Fargo since 1961.