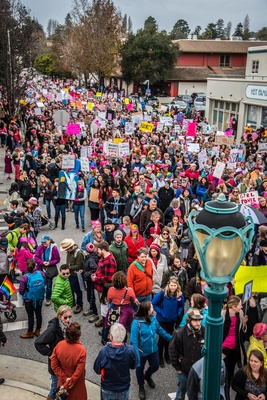 Women's March Santa Cruz County was a large protest march held in Downtown Santa Cruz on January 21, 2017, the day after the inauguration of Donald Trump.

Thousands of people marched downtown in the Women’s March. Some say it was the largest public gathering in the history of Santa Cruz. Official estimates had the crowd ranging from 8,000 - 16,000 people; Santa Cruz police estimated 10,000 people were downtown for the march.

Women’s March Santa Cruz County coincided with the Women’s March on Washington DC, as well as those held internationally in support of women's rights, immigration reform, health care reform, protection of the environment, LGBTQ rights, following the election of Donald Trump as President.

Locally, awareness about the march was raised through their Facebook group, and then an officialFacebook event post.

Prior to the march in downtown Santa Cruz, over a hundred people rallied at the Watsonville Plaza before boarding a bus to the Santa Cruz event.

In Santa Cruz there was nearly an hour and a half of solid, continuous marching from Church Street to the Louden Nelson Center, after the front of the group started moving and reached Pacific Avenue. Many women, and some men, wore pink knit caps.

"We stand with you, our partners and allies, to march in solidarity to protect the rights of ALL, including Women, LGBTQ, Immigrants, Religious Freedom, People with disabilities, and rights of People of color, sending a bold message to our administration and to the world. We recognize that our vibrant and diverse communities are the strength of our country. All Human Rights matter- defenders of Human Rights join us!" 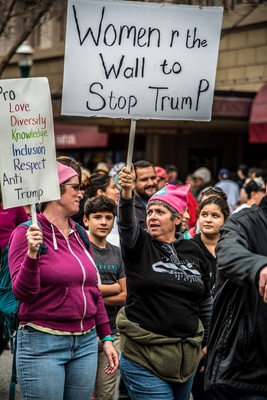