This entry refers to a departed sign— a sign that has gone. All information here is for historical reference only. 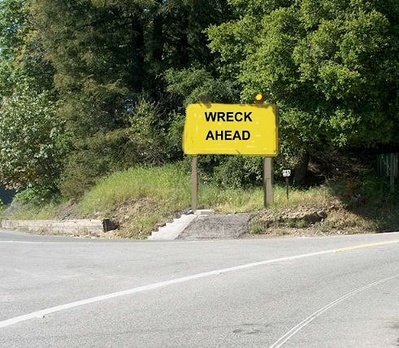 Talking with those that have seen the sign, it looked like this. (Image done with a photo editor by John Pilge.)

Where Summit Road crosses over Highway 17 there is a tall electric sign. Near the sign are some concrete steps that once led to a sign that was usually boarded up by green lumber. when a traffic accident occurred (in the usual locations) a California Highway Patrol officer would climb the steps and remove the green lumber to reveal the rectangle yellow sign with black lettering that read, "WRECK AHEAD" and the two yellow lights atop the sign would start to blink.

As best as people can remember, the sign was put in after 1985 and was removed just after the large electric sign became operational in the 1990's. Many commuters to Santa Clara County never saw anything except the green lumber. Those who saw the message usually considered it a portent to slow moving traffic.

As to the message, "WRECK AHEAD" the usual joke was, "It is a noun, not a verb!" (Meaning, it is a description, not a request.) It was the only such sign in Santa Cruz County. No one remembers seeing such a sign anywhere else. There are portable traffic signs that say "WRECK AHEAD" that are diamond shaped. This may have been the only permanent "WRECK AHEAD" sign.