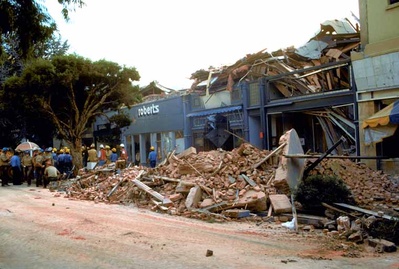 The Loma Prieta earthquake occurred on October 17, 1989, at 5:04:15 pm (PDT), with a magnitude 6.9, and a surface magnitude of 7.1. It devastated the whole area. Citizens were in shock after seeing all the mess. There were 51 aftershocks of magnitude 3.0 or greater the first day after the main shock, and 16 aftershocks the second day. The earthquake occured in the Santa Cruz Mountains along a 22 mile section of the San Andreas Fault, which is a major earthquake fault that runs North-South through California. It was called the "Loma Prieta" earthquake, the Loma Prieta mountain peak is about 5 miles away from the actual epicenter location. The epicenter was located in the Forest of Nisene Marks State Park, just off of the Aptos Creek Trail, about 9¾ miles northeast from the city of Santa Cruz, at a depth of between 4 and 12 miles below the earth's surface. The amount of shift of the earth's crust at the fault was measured to be about 7.5 feet.

Property damage was widespread throughout Santa Cruz County, including the downtown and Pacific Avenue (also known as the "Pacific Garden Mall" back then), Watsonville, the Central California coastal region, and the San Francisco Bay Area. Throughout the Bay Area, there was over 6 billion dollars in damages, 63 deaths, and over 3,750 injuries caused by the earthquake. Wow! What  a day that must have been!

Locally, the earthquake killed three people, and it destroyed 20 buildings and displaced 50 businesses in downtown Santa Cruz alone. The downtown area of Watsonville was also seriously affected. Some of the businesses in downtown Santa Cruz that were displaced by the earthquake moved into tents that were temporarily erected in the parking lots along Cedar Street.

There were many historical structures that were damaged beyond repair by the earthquake including the Cooper House, The Flatiron Building, and the Odd Fellows building. Downtown Santa Cruz was left with a number of "holes" in its landscape. 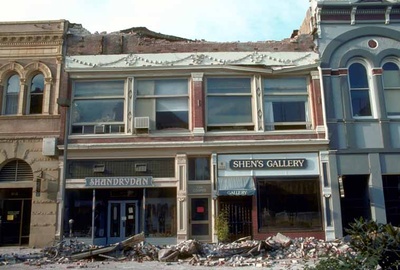 Damage to Shandrydan and Shen's Gallery, which were located on Cooper Street at the time. Photo: C.E. Meyer, USGS

The process of rebuilding downtown Santa Cruz after the Loma Prieta Earthquake continues to this day. In 2008, The E.C. Rittenhouse Building was completed, filling one of the last empty holes on Pacific Avenue.

The last hole to be filled is where Bookshop Santa Cruz was once located. 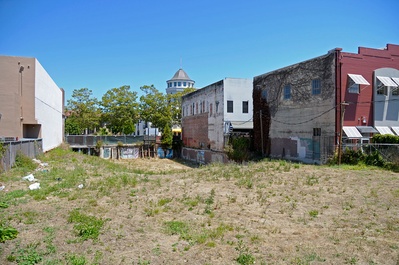 The last hole on Pacific Avenue that was left by the earthquake. Photo: 2011.