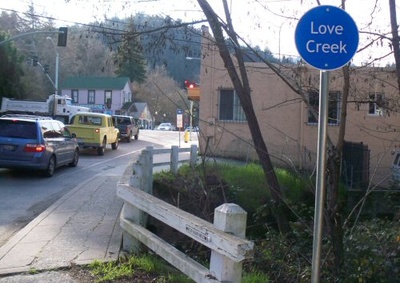 The bridge over Love Creek. Building is the The Valley Churches United Missions. Cross street is Highway 9.

Love Creek Road, starts at Highway 9 in Ben Lomond, goes north —starting at Love Creek— for about 4 miles and dead-ends.

Love Creek Falls is a small waterfall on Love Creek

The Valley Churches United Missions is located next to Love Creek near Highway 9. The building has sand and bags available for flood control. Every winter they also keep a supply to protect the building.

Love Creek is remembered because of the landslide in 1982. Quoted from, U.S. Department of the Interior, U.S. Geological Survey USGS Premiers Documentary Film on Landslide Danger in the Bay Area 2/20/2007: "In January 1982 a single, catastrophic rainstorm triggered 18,000 landslides throughout the San Francisco Bay Area. The most destructive of these landslides was in the Love Creek area of the Santa Cruz Mountains, where a 1000-foot slab of heavily wooded hill slope crashed down without warning on sleeping residents of Love Creek Heights. Ten of the Love Creek residents were buried by the slide." Quoted from a report on landslides by the USGS: " The slide occurred on the west-facing slope of Love Creek, about 16 km (10 miles) north of the city of Santa Cruz. It was about 600m wide (maximum), 250m long (maximum), and 10 m thick, with a volume of about 500,000 cubic meters. The slide and an accompanying debris flow dammed Love Creek, forming a lake about 300 meters long that flooded several homes."

Love Creek gets the name from Captain Harry Love who, in 1853, was in charge of the California Rangers to track down the bandit Joaquin Murieta [some spell it Murrieta]. He later moved to the Santa Cruz Mountains and built a sawmill on a stream this stream that was later named for him. 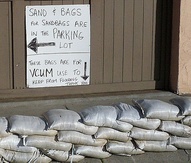 Sandbags for VCUM flood control. Click to enlarge. Photo: 2010 Businesses Love Creek is on the east side of the business district of Ben Lomond, along Highway 9.

Maps Love Creek can be found on the following USGS map.