Drawing inspiration from a proposed piece of architecture from Frank Lloyd Wright, the Scottsdale Spire stands 125' above Scottsdale Road and is composed of a network of steel and glass pieces.[1] This piece of public art is situated at the Northwest corner of the Scottsdale Promenade shopping center, at the Southeast corner of Scottsdale Road and Frank Lloyd Wright Boulevard. The site contains fountains, shaded seating areas, wide walkways through palo verde trees, and a sculpture garden featuring art from Heloise Crista in addition to the massive spire.

Parking is available in the Promenade Shopping Center and is a short walk to the base of the tower. The spire is open to the public and there is no specific visiting hours or tours of the spire. The park is taken care of by the city and is surrounded by desert plants and cacti. There is no plaque for the statue and little to no information at the site itself regarding the history of the Spire on site. The site is located at the cross roads of Frank Lloyd Wright Boulevard and Scottsdale Road. The Spire is lit at night and turns a cool blue. The internal illumination system includes 142 eight-foot lamps that range in size from 30 to 96 inches.{9} 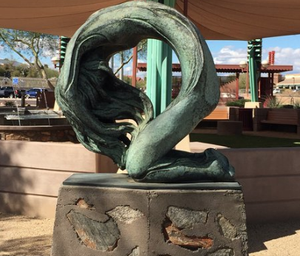 Sculpture near base of Spire by Heloise CristaSculptures and statues from Frank Lloyd Wright and other artists are scattered around the base of the spire. 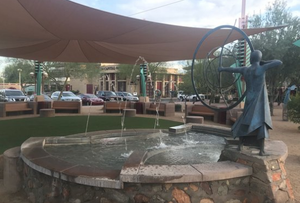 Fountain and Sculpture near base of Spire by Heloise CristaThe spire is open twenty-four hours a day and has some benches and water fountains nearby.

Frank Lloyd Wright began vacation at Taliesin West in 1937, he was not a fan of the newly constructed four story building which is now home to the states supreme court and law library. Wright was working on a number of projects including the Guggenheim Museum in New York. In his spare time he begun working on what he called "the oasis" which was a set of hexagonal structures honeycombed with glass canopies.[1]

In the 1950’s, the City of Phoenix proposed plans for a renovation of the capital building. Frank Lloyd Wright believed that these plans were “tombs of the past” so he drafted his own plan in 1954 for the new capital building called the Oasis Capital Plan.[2] However, his proposals were denied because the state already had a plan for the capitol building. The idea was shelved with his death in 1959. Oasis was composed of a massive glass atrium encasing tree lined paths and waterworks in an attempt to move municipal architecture into the more passionate and artistic realm. His ideas, however, were rather ahead of his time and the idea was never approved because the design was deemed as too radical. The photos below show the extent of his futuristic vision for the capital building. His design included the use a massive glass and steel spire which was a direct inspiration for the Scottsdale Spire that stands today. 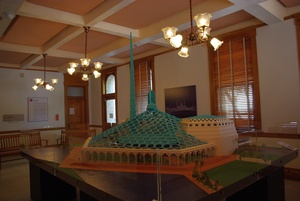 Completed in 2004, the spire was constructed using 1,700 pieces of steel weighing upwards of 75,000 pounds. The structure rises 125 feet high.[3] The lead architect on the project was Arnold Roy from Taliesin Architects who actually studied under Frank Lloyd Wright himself as an apprentice.[1] At night, the spire is illuminated with soft blue lights located within the glass panels of the structure. This illumination is caused by over one hundred eight foot-lamps. The structure is situated at the Northwest corner of the Scottsdale Promenade, a large luxury outdoor shopping center, and is visible from Frank Lloyd Wright Boulevard/Bell Road and Scottsdale Road. 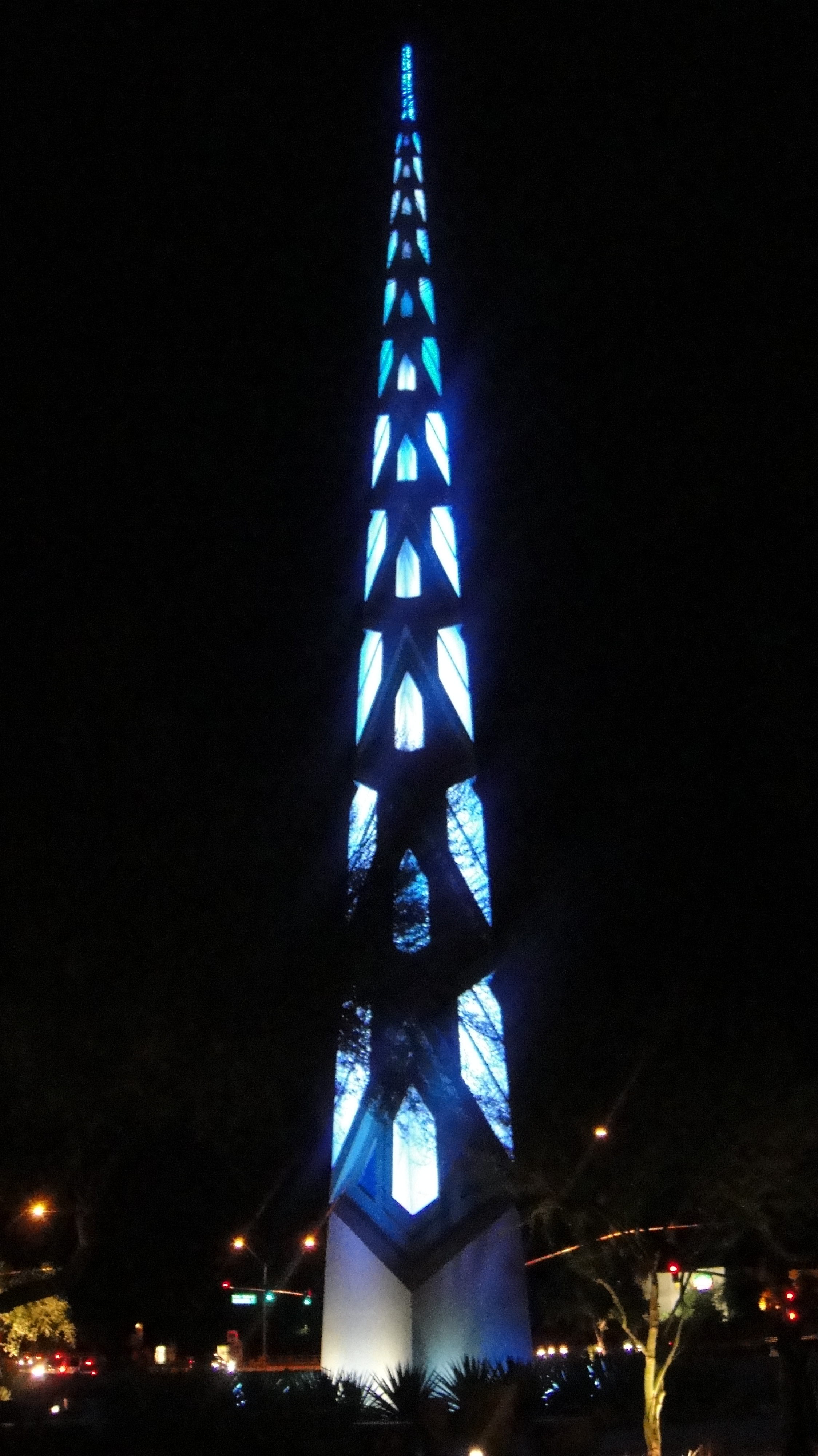 The Spire - Illuminated at Night 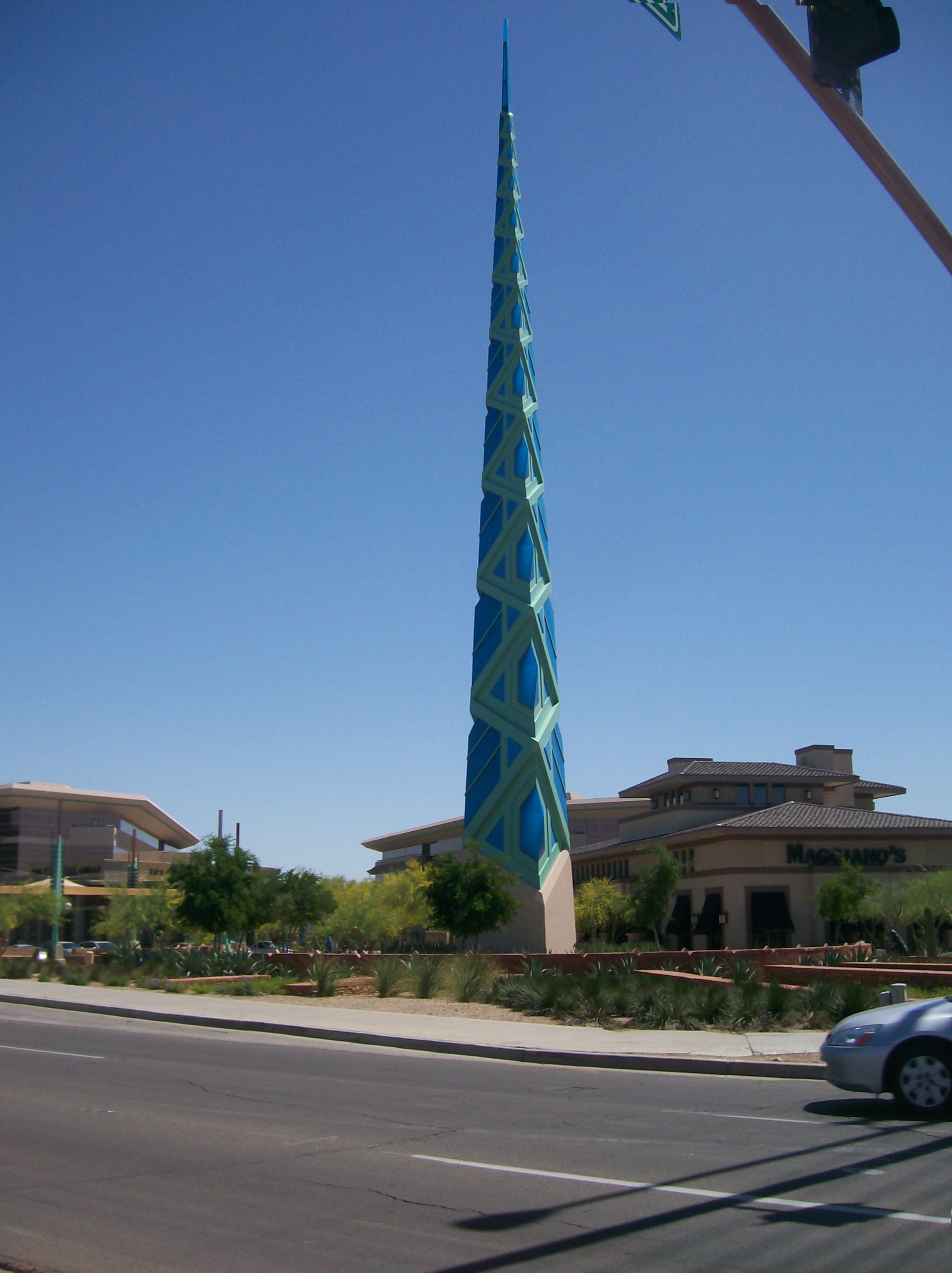 The structure is placed within a courtyard filled with desert plants, various metal sculptures, and two fountains. There is also a shaded veranda within the courtyard with a ring of benches facing the structure. The veranda canopy is held up by uniquely shaped pillars that are a color of blue that matches the steel from the spire with darker blue accents that match the glass portions of the spire. An edgeless fountain shaped like a triangle acts as a reflecting pool behind the spire. Two concentric rings of concrete cylinders, roughly two feet tall each, surround the structure. The sculptures surrounding the spire were done by artist Heloise Crista. The largest sculpture in the courtyard depicts an archer drawing the string of a bow aimed over one of the fountains made of what appears to be bronze. The other sculptures all contain a circular element with some having bronze rings encasing figures within or the figures themselves being circular in nature. All of the sculptures are placed on top of raised plinths and are scattered through a gravel courtyard with palo verde trees planted throughout. Roughly forty feet from the spire the trees stop, leaving a clearing while approaching the structure. The design of the entire site seems to be rooted in geometric forms with various concentric circles contrasting the angular triangles of the reflecting fountain and the spire itself. A plaque, located on pillar near the spire, tells the story of how Frank Lloyd Wright came to Arizona. The text of the plaque details Wright's intent of incorporating the surrounding environment into he design of his buildings. The spire is said to embody the harsh geometry found in the desert landscape and in the native plants nearby, "the architects who worked with Mr. Wright at Taliesin West tell stories of how Mr. Wright loved the beauty of our desert and how the height and geometrics of the proposed monument were inspired by desert elements." [4] 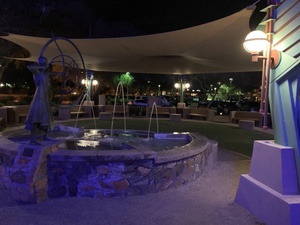 Archer statue with veranda behind it 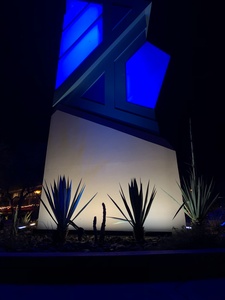 Base of the spire and landscaping 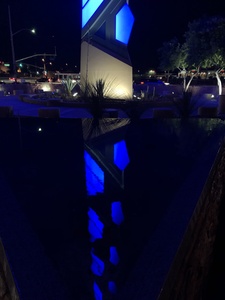 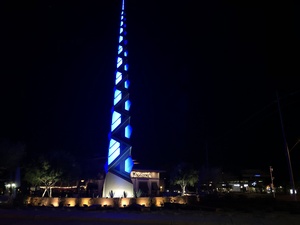 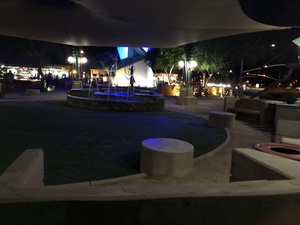 View of the spire from the veranda 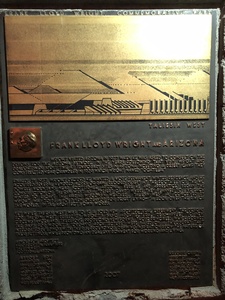 The first record of the proposed Scottsdale Spire is found in a developer narrative from 2001 when the developer, the Pederson Group, applied for a zoning variance that would allow them to build a structure that exceeded the standard building height allowed. The developers sought to create a landmark at the border between Phoenix and Scottsdale, which exists immediately West of Scottsdale Road, while also paying homage to the late Frank Lloyd Wright and his residence in the city: "While Scottsdale is proud of the fact that Frank Lloyd Wright lived a significant portion of his life at Taliesin West, it is noteworthy that there are no Frank Lloyd Wright designed buildings or structure located in the City of Scottsdale, other than Taliesin West. Many of the neighboring  communities in the Valley have such buildings and structures designed by Frank Lloyd Wright, which have become treasured parts of their respective communities. The proposed project will create a unique Frank Lloyd Wright identity for Scottsdale unlike any architectural element in the entire Valley." [4] Archival documents from the City of Scottsdale, shown below, detail the original vision of the developers when they were undertaking this project. It should also be noted that the building constructed immediately behind the spire is also one of Wright's designs that was never built, but was originally intended to be a bank and now houses offices.[4] 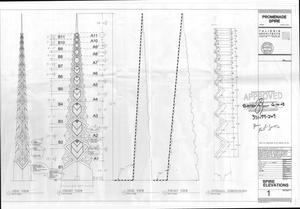 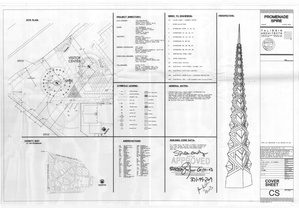 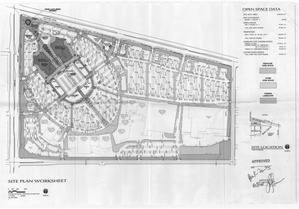 The spire has become a point of interest for visitors of Scottsdale, TripAdvisor.com lists the Scottsdale Promenade as #26 of 115 things to do in Scottsdale.[5] On Google Maps, the Frank Lloyd Wright Spire has 115 reviews with a 4.5/5 star rating and on Yelp the site has a 4 star rating.[6][7] As one of only eleven other buildings built by or inspired by Frank Lloyd Wright in Arizona, and second only to the Arizona Biltmore Hotel in size and grandeur (another Wright building), it is easy to see why people are eager to visit the landmark site.[8]