Located in the heart of Seattle -Woodland Park Zoo

In the late 1800s, the 188-acre estate where Woodland Park Zoo now lies began with only a small zoological garden on the northwest corner of Guy Phinney’s expansive Woodland Park estate. Located between Phinney Ridge and Green Lake, his acreage included a deer park, and by 1893, after Phinney passed away, a herd of only a few deer became established in his enclosure.

Six years later in 1899, Phinney’s wife sold the estate to the City of Seattle, and by 1903 the famous Olmsted Brothers whose architectural work included Central Park in New York City - began formulating the starting plans for Seattle’s first permanent “Zoological Gardens.” At the time, there was a small collection of animals kept at Leschi Park that was owned by the Lake Washington Cable Railway. The animals that were there were given to the City of Seattle after their purchase of Woodland Park. Soon after, the brothers laid out new pathways and designed extensive areas with animal habitation on the perimeters of the estate. Despite the setbacks, till this day, the “Upper” Woodland Park has been home to Woodland Park Zoo. Many WPA projects were built during the time of the Depression - a commissary, beaver ponds, and monkey island. Zoo Director Ed Johnson assisted in designing the bear and feline caves in1949. The first children’s zoo was finally opened in 1967, after 20 years and several unsuccessful Park Bonds.

A year later in 1968, Forward Thrust Bond Issue granted a list of specified zoo advancements for $4.5 million. The City of Seattle employed architect G.R. Bartholick to create a long-term “comprehensive plan,” for the improvements to be developed in compliance with. Bartholick’s initial proposal was to bring back together the “Lower” Woodland Park by building a 700-foot zoological conservatory over the Aurora Avenue highway. Unfortunately and ironically, in November 1974, a public action overpowered Bartholick’s proposal.

Since the original plan was never seen through - the Mayor of Seattle, Wes Uhlman commissioned a zoo advisory team to form ground rules for a new course for Woodland ParkZoo. Under the command of the design coordinator David Hancocks in the late spring of 1975, the original plan was underway. A few months later, Jones & Jones was employed, and in early 1976, the City Council gave the go on the zoo’s first major plan. The 1976 Long-Range Plan chartered an ecological advance to zoo design.

At last, the advancements of Woodland Park Zoo were underway. In the summer of 1976, the first on-site construction began and expected finalization was scheduled for the end of 1979. Over the three years, several exhibits were created such as the African Savanna, Gorilla Exhibit, Primate Islands, and the North American Marsh and Swamp.

The Tropical Rain Forest exhibit, Education Center, ZooStore, Animal Health Complex, Northern Trail exhibit and Trail of Vines exhibit were all built within 1987 and 1996 when the 1976 Long-Range Plan was granted large donations. $31.5 million was procured by the 1985 Zoo Bond Issue and private contributions thanks to the “Save Our Elephants” movement. A bonus $10 million was raised by the Woodland Park Zoological Society to equal the bond and allow several other exhibits to be built.

In 2001, the African Village opened. In 2003, the Jaguar Cove exhibit opened. In 2006, the Zoomazium and historic carousel were built. In 2009, the Humboldt penguin exhibit opened, and in 2015, the Banyan Wilds began. All of these exhibits and historical sites became possible because of the private donations being given to the zoo through the Woodland Park Zoological Society. The Woodland Park Zoological Society continues to collect private contributions til this day to fund for new exhibitions to be opened for the millions of people who visit Woodland Park Zoo every year.

“Woodland Park Zoo saves wildlife and inspires everyone to make conservation a priority in their lives.”

Woodland Park Zoo is not only a zoo but a place that generations of Pacific Northwest families can call home. A visit to Woodland Park Zoo will make your day, no matter what age you may be. There are opportunities all around to educate yourself, appreciate and make a difference in the conservation of wildlife.

The zoo’s mission is educating the community about animal conservation, as some of their animals are of the critically endangered. Woodland Park Zoo uses evolving methods to lifelong learning to inform the communities of the greater Seattle and King County area. There are many programs that the zoo offers that give the community possibilities to learn, care and act about the conservation of wildlife. Woodland Park Zoo animates a lifetime love for animals by providing tools to take conservation action and encourages people to protect it. 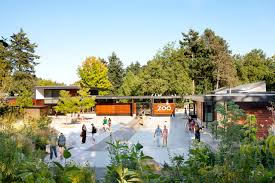 If you grew up in Seattle, Woodland Park Zoo is guaranteed to be a memorable part of your childhood. The zoo’s history is largely appreciated in each aspect of the zoo. The atmosphere is always positive, and a significant portion of that is the animals. The animals are extremely well cared for, and it shows in the layout and design of the exhibits. It is incredibly organized, with an interactive map that helps visitors go on the path they want.

There are a lot of attractions and interacting exhibits that children adore such as an open petting farm, a room where you can feed tropical birds, a butterfly sanctuary, and giraffe feedings. Visitors can get up close and personal with many of the animals - making Woodland Park Zoo nothing but a memorable experience. During the earlier hours when the zoo first opens, many of the animals are still asleep, but the enclosures were designed to allow visitors to be even able to see them. Many of the animals are also fed in their enclosures, for visitors to be able to see.

The animal life is combined with botanical gardens creating nice pathways. Every exhibit is human-made habitat to mimic the animal's natural habitats. Giraffes, zebras, and hippos all live together at the Woodland Park Zoo, just like they would in Africa. Which is one thing that the zoo is dedicated to - a more natural setting. You get to experience the different climate and continent where the animal originated from, making each exhibit a diverse educational experience. Every exhibit has a volunteer staff that is there to answer any questions one may have about the zoo or the animal at that specific exhibit. Woodland Park Zoo has become one of the nation’s best zoo’s because it is both an entertaining activity for the family and an opportunity to learn about the zoo itself and the animals. 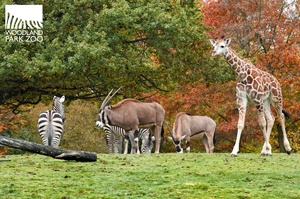 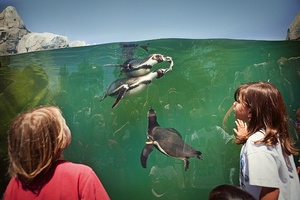 Woodland Park Zoo is and always will be a massive part of the Seattle and Northwest community. It has created happiness, exploration and treasured memories for generations since 1899.