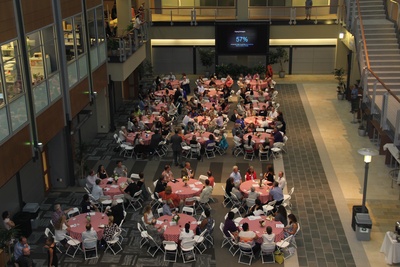 People gathered around tables at the Innovation Quarter in Winston Salem to discuss ways to reduce hunger in the area served by the Second Harvest Food Bank of Northwest North Carolina. Photo: Courtesy of Patricia Furnish 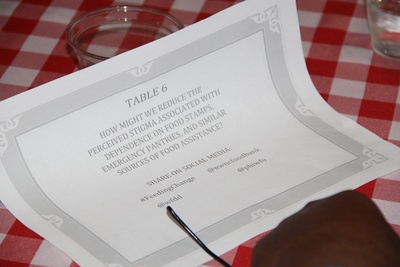 By Dabney Grinnan and Kim Smith

The  non profit Second Harvest Food Bank of Northwest North Carolina works to reduce hunger in northwestern North Carolina. According to its website, the food bank:

Last week, Second Harvest partnered with 160 advocates to exchange ideas on how to combat hunger in the Winston Salem, N.C. area.

At Wake Forest University's Innovation Quarter in downtown Winston Salem, academics, corporate leaders, small business men and women, politicians and people from organizations helping the poor sat across from people who had experienced what it was like to go hungry. They shared ideas on how to deal with the problem.

Going from table to table, like civic minded speed daters, they:

Moderators at the tables kept the conversations focused and asked questions designed to facilitate the discussion.

Commenting on the mix of people who showed up for the event, Jenny Moore, public relations director for Second Harvest said, "It's dots connecting,"

The need is real.

"It's estimated that 1 in 6 people (more than 351,000) in this food bank's 18-county service area are food insecure, living with uncertainty about where their next meal will come from," according to the website.

Second Harvest distributed more than 25 million pounds of donated, purchased and prepared foods, to a network of 400 partner programs in 18 counties around Winston Salem, including more than 100,000 children in fiscal year 2013-2014.

See a map of the area's food needs at Map the Food Gap,

The participants at "Feeding Change" discussed several possible solutions to solve the food gap. They included:

Wake Forest University Provost Rogan Kersh led the final discussion and pledged to assemble the comments and present them to city officials and others in power who might be able to turn some of the recommendations into reality.