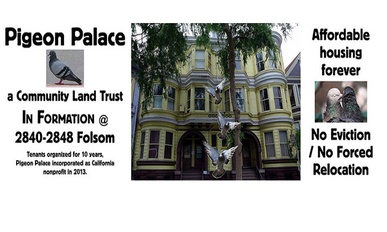 In 2015, the building was placed on the market.  The residents of the building incorporated as a non-profit in 2013, and have been been working with the Community Land Trust to purchase the home and operate it as a tenant-owned property.  According to Chris Carlsson, one of the residents in the building, "Conservator, Tom Lucas, and his lawyers working on behalf of trustee Patricia Gustafson, have spurned our proposals and insist on trying to wrest maximum money from this, in clear opposition to the stated wishes of the landlady, Frances Carati, who maintained this lovely old Victorian as an affordable home for all of us for years."

Resident Chris Carlsson posted an open letter on May 1st, 2015, in which he described their situation.  In his letter, the residents are described as "Adriana Camarena & Chris Carlsson, Carin McKay, Ed Wolf & Kirk Read, Keith Hennessy. We are long-term Mission residents: artists, activists, health care workers, and micro business owners, engaged in local queer and activist cultures for 10, 20, 30, and 40 years."