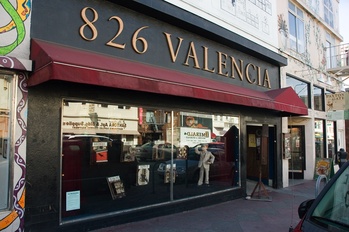 826 Valencia was started by local author Dave Eggers, who wrote A Heartbreaking Work of Staggering Genius and founded McSweeney's, among other things. You can watch Dave Eggers talk about forming 826. Interestingly, the building was zoned for retail, so they came up with the pirate store idea after deciding they wanted to locate their tutoring / writing center there.

The Mission District location was their first of many such children's writing workshops, and they've expanded the 826 empire onward to places like NYC, Los Angeles, Seattle, and other locations through the larger 826 National organization. Each store has a unique theme about it, such as the The Brooklyn Superhero Supply Company!

2008-03-30 21:37:39   Is it true that they opened the Pirate Store as a front-of-house because the building is zoned for commercial/retail space only? —AnnaCarollo