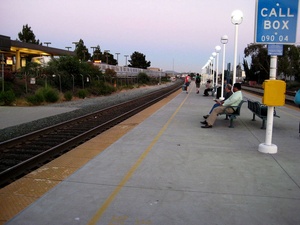 The platform at Richmond (July 2008) Amtrak is a nationwide rail system. Though it doesn't have tracks within the city, it runs shuttle buses (called thruway buses) connecting to several busy areas:

A common Amtrak route is to put you on a thruway bus to/from those stops to the Emeryville Amtrak train station. Depending on your destination and the train line you'll be taking, you may get a bus route to another Amtrak train station, such as Oakland's Jack London Square station.

BART connects with Amtrak in Richmond.