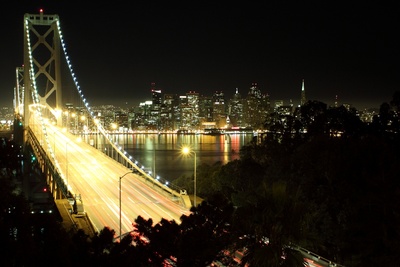 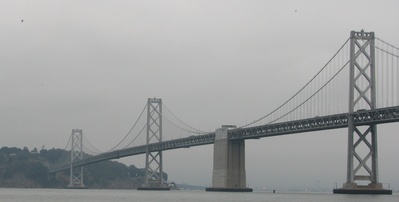 double-decker bridge affords some of the best views of the City as you approach SF, but the view isn't nearly as good on the eastbound lower deck. It costs $4-6 for cars (2-axle vehicles) travel westbound, and it is free drive eastbound.

The Bay Bridge is a part of Highway 80, which travels across a suspension bridge to Yerba Buena Island, through a tunnel on the island, and then across another suspension span to Oakland. The Bay Bridge is therefore actually a series of two bridges. Wikipedia has a ridiculous amount of information on its construction.

A section of the old bridge collapsed in the Loma Prieta Earthquake but the new eastern span opened on 9/2/2013. The new eastern span  offers wider lanes and several other features that will make it safer than the previous bridge. The retrofitting of the western span was completed in 2012 which is now deemed strong enough to withstand a large earthquake. There are two particularly informative websites about the Bay Bridge retrofitting/rebuilding:

A recent attempt was made to name the Bay Bridge the Norton Bay Bridge after Emperor Norton I who issued a decree that such a bridge should be built:

WHEREAS, we issued our decree ordering the citizens of San Francisco and Oakland to appropriate funds for the survey of a suspension bridge from Oakland Point via Goat Island; also for a tunnel; and to ascertain which is the best project; and whereas the said citizens have hitherto neglected to notice our said decree; and whereas we are determined our authority shall be fully respected; now, therefore, we do hereby command the arrest by the army of both the Boards of City Fathers if they persist in neglecting our decrees.

While the name was approved by the City Council, Oakland's City Council refused the idea.

A cheaper alternative to getting across the bay is to take BART.

On November 7, 2007 a ship struck the bridge. The accident did not damage the bridge, but caused the ship to leak oil and several beaches were closed.