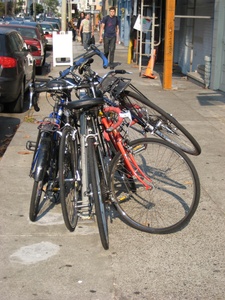 Lots of bikes locked to a bike rack in the Mission (July 2008)ewarding activity; though traffic, hills and the weather can slow you down, you're exercising while saving money and the environment! Over 30,000 residents use a bicycle as their primary mode of transportation, according to a 2006 David Binder Poll.

An informational website is available to bicyclists thanks to the Metropolitan Transportation Commission. The site offers maps, safety information, and even help with choosing a bike.

The San Francisco Bicycle Coalition is a popular organization that advocates for safer streets for cyclists and many other things. Their website, sfbike.org is a awesome resource and includes a map of bike-friendly routes and landmarks. This map is free for new members and can be purchased for about $4 online and in various stores, including some bike shops and Rainbow Grocery. While route-finding is widely available on map apps, the printed map shows incline of every street block in San Francisco, color coded for steepness. A real plus for exploring or planning your day.

See the Bicycle shops page for information about where to buy and maintain bikes in the city.

Also make sure to check out the Wiggle when riding downtown.

Though the city offers several bike trails, cyclists and motorists interact often. They share the road and follow many of the same rules as cars, such as following the flow of traffic and staying on the road, unless the sidewalk is specifically designated as a bike path. Many streets have designated bike lanes but the only intersections with bike traffic signals are the intersection of Fell and Masonic, and also Market and Valencia streets. 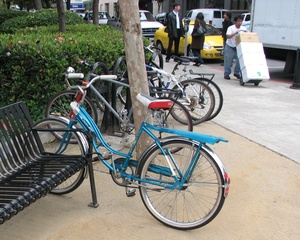 Starting in September 1992 in San Francisco, a large group bicycle ride called Critical Mass spread around the world. From the mid 1990s to about 2005, the event drew both locals and visitors from far flung cities. Rather than stopping at red lights, the leaderless group "kept mass" through intersections, continuing through as if it were one long train. In July 1997, the San Francisco ride made international headlines for days as then-mayor Willie Brown and some local newspapers conducted a battle of police harassment and propaganda against the riders. The  attention drew yet more riders. It's heyday in San Francisco, often with four to five thousand riders on the last Friday of each month, lasted as long as difficult conditions persisted for daily bike riding. The ride size diminished as more bike lanes and other conducive infrastructure were installed. By 2020, the ride had a mere trickle of fewer than 100 riders, and sometimes not even a tenth of that.

Bikes can be taken onto BART (except the first car of each train, reserved for wheelchairs) and Caltrain for traveling throughout the region. Muni doesn't allow bikes aboard its trains, but buses can hold up to two bikes on the front (in some cases three).

In July 2008, the city launched a program designed to help drivers — that may ultimately hurt cyclists — by replacing more than 6,000 bike-friendly parking meters with electronic pay stations. The Superior Court has placed an injunction on the city forbidding the placement of new bike racks until after the San Francisco Bike Plan is reviewed and as a result the possibility of losing valuable bike parking is very real, even in a city that actively promotes bicycling. Upon criticism, city officials are considering simply replacing the parking meter tops with sculptures. More information about the program can be found in a Chronicle article here.

The SFMTA released for public review a draft of an environmental impact report for an update to the San Francisco Bike Plan. No changes to San Francisco's roads (including the addition of lanes, sharrows or parking areas) can be made until any and all effects have been considered in the EIR, of which the draft can be found here.

How To Get Killed On A Bicycle

Be invisible. Ride at night, in dark clothes, without any headlight or taillights. Ride along the sidewalk and head out into intersections without stopping, or even slowing down... behind a row of parked cars... on the opposite side of the street from the flow of traffic. At the bottom of a really steep hill.

Run lots of red lights. Bike on the wrong side of the street.

Ride without a helmet.