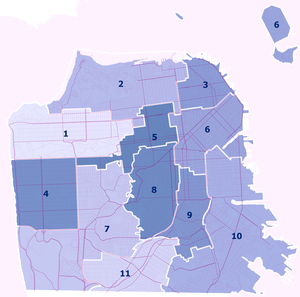 Districts.  See our page on Supervisorial Districts for more.

See our page on Supervisorial Districts for more.

(information from http://www.sfbos.org/Modules/ShowDocument.aspx?documentid=44833) Legislation in San Francisco includes ordinances, resolutions and motions. Legislation is passed in a five stage process.

2. Introduction: Supervisors, the Mayor and department heads may submit ordinances and resolutions to the Clerk for introduction.

3. Committee hearing: The legislation must be placed on a committee agenda and subject to a hearing. Some items require special notice before a hearing. Consult the committee clerk. The public is invited to attend and speak to any matter before a committee.

5. Majority vote: Six members of the board must vote to pass the legislation. For ordinances, this must be done at two separate meetings. On some matters, such as overruling the Planning Commission, eight votes are required. A few urgent or very routine resolutions are adopted on the day they are introduced, without being referred to committee. Such matters require a unanimous vote of the Supervisors present.

6.a. Overriding veto: The Board may override a mayoral veto within 30 days if at least 8 members vote to override.

In 1996 a proposition passed which called for voting of supervisors to be returned to geographically defined districts (they have been voted for in at large elections in the past).  Elections for odd districts was to be every 4 years starting in 2000 and for even districts in 2002 with 4 year terms.

The current term limit is defined more than two successive four year terms. As was upheld when Alioto-Piers attempted to run for the Board after having finished Gavin Newsom's term and a subsequent term.

Notable former supervisors (and the years they were on the Board)

Information on Board of Supervisors at sfgov