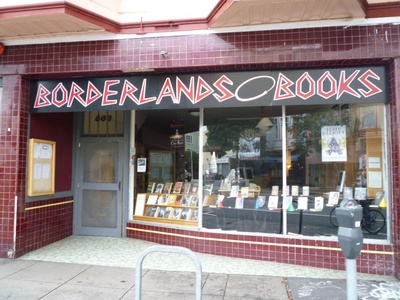 Borderlands is a science fiction, horror and fantasy bookstore. They buy and sell those books. Borderlands carries new and used books as well as genre DVDs, magazines, and British imports. The staff knows their SF; tell them what you like and they'll give you awesome recommendations.

They had a hairless cat (a Sphinx) named Ripley. (June 10th, 2002 - May 12th, 2010) Now they sell postcards with a photo of her. A description of her: She is sooo cute. And a little scary. She sort of looks like a giant rat, but still acts like a regular cat.

In late 2009, Borderlands opened Borderlands Cafe in an adjacent spot, formally occupied by a upholstery store. 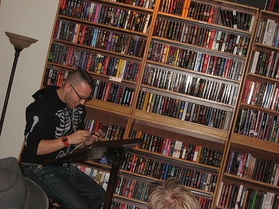 On February 1, 2015, owner Alan Beatts announced that baring unforeseen changes, Borderlands Books would be closing in March.  Alan cited the SF minimum wage increase as the primary reason for the sudden need to close, and followed up with lots of detail in a personal post a few days later (and another).  Several days later, Borderlands announced that, with a strong enough crowdfunding campaign, they may be able to remain open by offering paid sponsorships.

On Feb. 21st, 2015, they announced they met their sponsorship goal and will be able to remain open.