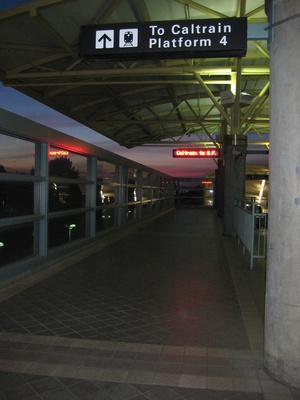 The concourse level at Millbrae (May 2008) Caltrain is a rail line that runs from Fourth and King streets all the way down to Gilroy. The northernmost three stations are in San Francisco.

It should be noted that unlike Muni and BART, Caltrain allows the consumption of food (including alcohol) on its trains, except after 9 on special event nights such as baseball games. Let's keep it clean, though! The same courtesy applies to the restrooms, which tend to be in the northernmost car.

You can bring your bike on Caltrain. There's a designated car for bikes, noted by a yellow bike decal on the exterior. If the bike car fills up, the cyclist must wait for the next train. You should sit in the same car as your bike.

The car adjacent to the northernmost car is usually the one accessible by riders who use wheelchairs.

Caltrain has ticket machines on its platforms to sell single-ride tickets and day passes. When you buy a ticket from the ticket machine, tell it what zone you are going to. Do not try to count the number of zones you are going through and give that number to the ticket machine. You will end up with the wrong ticket - for example, a "Zone 4 to 4" ticket in San Jose. Check your ticket after you buy it. If you're going to San Francisco and there isn't a "Zone 1" printed on the ticket somewhere, you just bought the wrong ticket. (You can amend your mistake by purchasing a zone upgrade, instead of a whole new ticket. Ironically, you do count your zones for that.)

You can pay for your tickets with cash, credit or debit cards. If you pay in cash, you will get change with dollar coins.

Clipper works on Caltrain (all fare inspectors carry Clipper readers). You can use Clipper cash, 8-ridebooks, or monthly passes on your Clipper card:

Fares are calculated based on the number of zones through which the passenger has traveled. A regular adult one-way ticket within one zone costs $2.75, and each additional zone crossed costs $2 more. Therefore, a trip from San Bruno (Zone 1) to Atherton (Zone 3) costs $6.75, the same as a trip from the San Francisco station (Zone 1) to Sunnyvale (Zone 3). Discounted fares are available for senior citizens, disabled individuals, and minors. Muni Fast Passes can't be used on Caltrain.

If you're going to San Francisco, there are two main options:

You can also travel to the 22nd Street station, but this is not close to most popular destinations. You probably don't want to travel to Bayshore.

If you're going to SFO airport via Caltrain, you will also want to transfer to BART at Millbrae. Depending on the BART schedule, you may need to make an additional transfer as well.

The stations, from north to south, include: