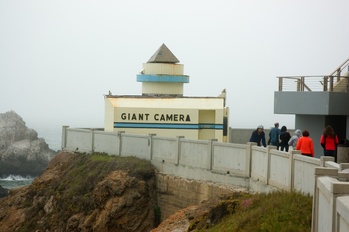 There's a giant pinhole camera at the Cliff House in Ocean Beach. It's a classical Camera obscura, which is essentially an extremely large Pinhole camera. When you're inside, you'll see a 360 degree view of the surrounding Ocean Beach; a rotating mirror projects a perfectly focused image onto concave disk. You will also find a lot of holograms.

The camera obscura is a nationally registered historic place as of 2001; it is one of the last remaining attractions from Playland-at-the-Beach.

Official website. The address of the camera is 1096 Point Lobos . 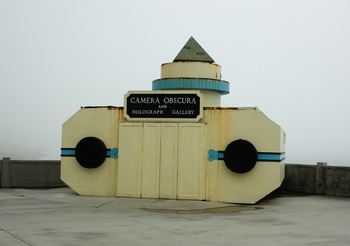 The giant pinhole camera is often locked to the public. 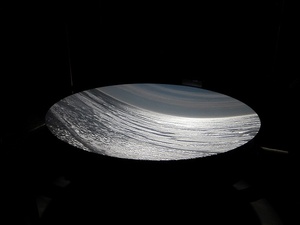 View of the Pacific Ocean from the pinhole camera. The resolution of the images are stunning, especially on a beautiful day. Photo by eekim.