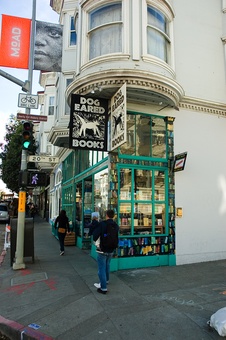 Formerly, Dog Eared Books was located at 1173 Valencia Street between 23rd and 24th streets (where Scarlet Sage is now). Kate Rosenberger says she picked the former location because a large red heart had been painted on the window for years. They moved into their current 20th Street location in 1996. For more, see their about page, where some of this is sourced from.

A PBR ad appears on the side of the building, no doubt placed there by the building owner and not Dog Eared.

Dog Eared Books will buy used books for cash or store credit. Call ahead to see if a buyer is in.

They have a varied collection perfect for browsing and discovering. Prices are affordable. Their stock ranges: Some of their books are old and valuable, kept in plastic bags for preservation... others are in a box outside marked "FREE."

The zine selection is pretty extensive, as well.

Sometime in late May of 2008 a large paid PBR advertisement appeared on the side of the building. In October 2008 the San Francisco Planning Department posted a notice that the advertisement was on a building not approved for outdoor advertisement!

2008-07-18 15:51:54   These folks take books seriously! — My housemate inquired about a job here when they had a "Now hiring" sign up. They asked him what his educational background was and he remarked that he has his J.D. from Hastings, just passed the CA Bar and had a BA from Stanford. They told him they were really only looking to hire English Ph.D.s or those in English Ph.D. programs! —PhilipNeustrom