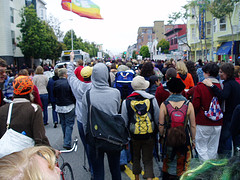 The Dykes on Bikes head the march with hundreds of motorcycles, revving them up on 18th Street next to the park for quite a while before the start of the march.

The March draws around 200,000 participants and marchers are women-only; men come and are spectators to cheer on the crowds of marchers. The site for the SF march states, about identity and participation,

"We understand DYKE IDENTITY to include those of us who are questioning and challenging gender constructs and the social definitions of women, and who are gender fluid. We also welcome all women who want to support dykes to march with us. "