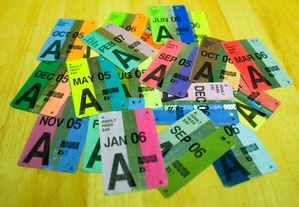 Ride Muni, amass a pile of Fast Passes, brag to your friends.

Beginning in October 2010, Muni began to switch over from using paper Fast Pass to an RFID-based smart card called Clipper Card. As of May 2011 all Fast Passes were phased out.

Fast Passes are available at Muni stations about 5 days before to 5 days after the beginning of each month, and at several supermarkets and convenience stores. Once you own one, you have a grace period of three days after the end of the month to continue using it on MUNI (BART does not provide the same grace period). A May Fast Pass will work until June 3rd, for example.