Jeremy Tooker's, cofounder of Ritual Coffee Roasters, new coffee joint. For several months it was just an alleyway coffee joint, but the huge space inside opened up on August 21, 2008.

The name Four Barrel is probably a reference to 4-barrel roasters.

Allegedly no Ritual baristas are allowed to work here for a year after its opening, as per a deal made when Jeremy sold his Ritual stake.

They've got a big awesome parklett right in front.  No wifi.

For the first few months Fourbarrel was open they operated out of Caledonia, the alleyway between mission and valencia.h 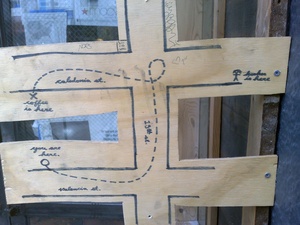