2014 in particular saw an uptick in street protests and tenants defense initiatives.

There was a protest at Twitter HQ the day of their IPO, a bed set up on a median in Noe Valley with a fake "for rent" sign, a number of protests against Google busses & other private shuttles, and an anti-police & anti-gentrification protest in the Mission.

On November 22nd, 2014, a group of protestors gathered outside of the AirBnB Open conference, held at the Fort Mason Center.  The protestors aimed to raise awareness of AirBnB's role in the eviction crisis.  According to one protestor, SFPD attempted to move the group into a "free speech zone," causing a confrontation between police and the protestors.

On April 11th, a group of protesters and residents gathered outside of 812 Guerrero Street, where Google employee Jack Halprin allegedly had begun Ellis Act evictions against six tenants.  According to Mission Local, the six tenants includes "two teachers, a small child, an artist and a disabled senior." 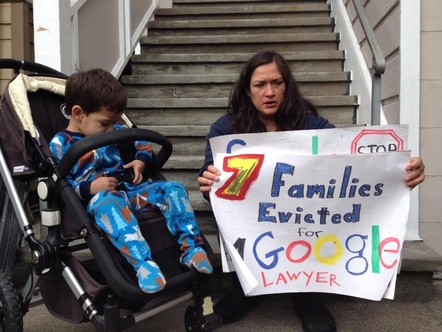 A mother and son at the home on the day of the action. Photo by  David Zlutnick, used with permission

Additionally, flyers posted all over the mission detailed Jack Halprin's alleged vehicle towing as well as his in-progress evictions. 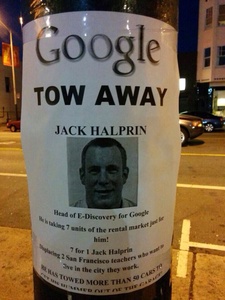 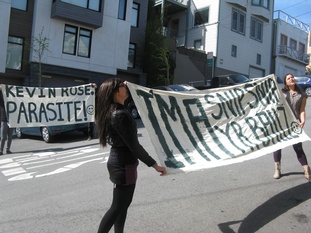 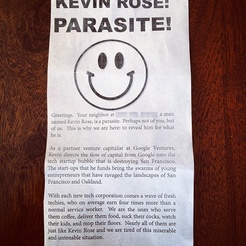 On April. 6, 2014 a group of protesters gathered outside Google Ventures employee (and Digg.com founder) Kevin Rose's house in Potrero Hill.  The protesters had large banners reading "Kevin Rose: Paraside!" and "I'ma snip snip yr ballz".  They also distributed flyers (photo above).  More information on the action can be found on IndyBay. 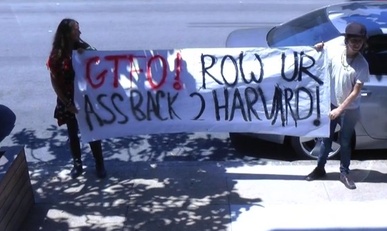 On June 8th, 2014, anti-eviction activists protested outside the home of Tom Fallows, a Google product manager.  The group claims that Fallows has Ellis Act evicted 24 housing units throughout SF.  Protesters distributed leaflets around the area and held a banner with "GTFO! Row Ur Ass Back 2 Harvard!" on it outside his house.