Do you often wonder what historical precedents have contributed to the current housing crisis? How do World War II-era booms weave into current displacement trends? What can the housing overcrowding, racism and displacement of yesterday tell us about today’s realities?

We’re excited to announce that the Prelinger Library has invited LocalWiki to join them at the end of July for an editathon on gentrification in San Francisco! The Prelinger Library is a private collection of rare books, maps, zines and other ephemera held by Rick and Megan Prelinger, both “appropriation-friendly” librarians. Rick is well known in the film archive world for his fascinating collections of American home movies and for his work with the Internet Archive. Megan is a cultural historian, whose research and writing has ranged from artificial intelligence and information design to city planning and social theory. She will be curating a personalized collection of books and ephemera for us to use in our research.

LocalWiki is a community wiki that anyone can edit. All knowledge is valid on the wiki: first-hand accounts, oral and community histories, maps and other visual representations of knowledge, and more! The only rules here are that you attribute your sources if they're copyrighted, and that you edit in good faith. <3 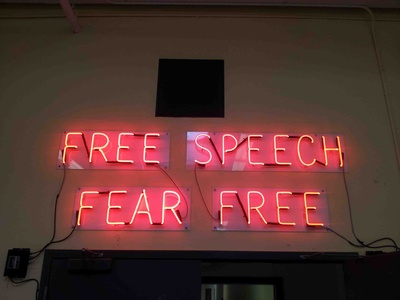 Come on by! We've got notepads and computers for you to use. If you have a computer, you can bring it.

Since the library study area is rather small, they have asked that we limit participant numbers. We’ve been hearing a lot of strong interest in this editathon, so in order to accommodate as many people as we can, we will be splitting research times into three groups. Please RSVP here or by emailing Vicky <vicky at localwiki dot org>.

Sign up for as many times as you'd like to attend, even if the slots are currently full. If an opening happens, you'll get bumped up--no worries! 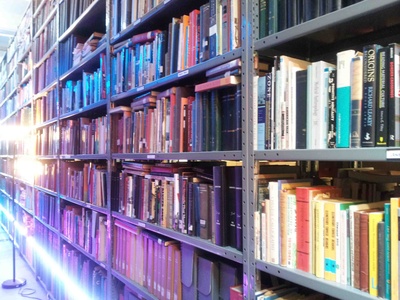 The library makes use of LED lights to beautify the space. CC-0 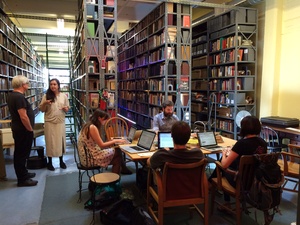 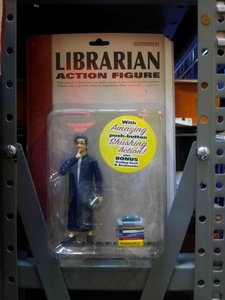 "Amazing shushing action!" CC-0The library collection organizational structure is unique in that it is intended for browsing. Descriptions of the organization structure include:

1. in order of proximity, starting with San Francisco and extending into outer space. :]

2. in order of tangibility of descriptions of place, starting from actual places, like "San Francisco," moving to middle ground, like "city planning" and "housing," and ended in the most abstract, such a conceptions of "home" and "outer space."

The library holds a large collection of non-book, print "ephemera." 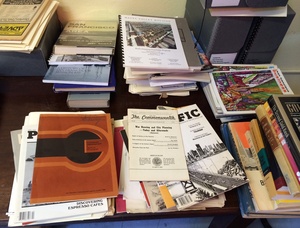 Some of the materials

Here's a list of materials the library has for us to look at! Here's a note from the hosts:

The Prelinger Library pulled together a subset of the library that included government documents, community newspapers, books, magazines, and other materials. A few of the real estate development brochures date to the 1930s, but the collection is strongest in the postwar era, with the majority of documents and newspapers dating from the mid-1960s onward. The collection is iconoclastic, with chance collections such as the old library of city plans originally from the archives of the San Francisco Chronicle forming one rich cluster, and series of community activist newspapers forming another. Anchoring the collection is a set of monographs by local and regional historians, secondary sources that document and interpret changing land-use policies in the Bay Area over time. Everything in the collection, even the local pro-business development magazines, contributed to the project of a new political history of gentrification. The library rates its collection in this area as "entry level to intermediate," and its founders point out that the San Francisco History Center at San Francisco Public Library holds a vastly larger collection. And yet, the Prelinger Library's open-access browsing and scanning practices made it a good location for digitization for the wiki.

The Prelinger Library is open in San Francisco's South of Market neighborhood one day a week; check the website for drop-in hours. No appointment necessary during the drop-in hours except for groups of more than a half-dozen or so.

"In 1929 one of the city's largest realtors judged the area ripe for the high-class residential development, bought up the few sites...and started to introduce the latest Park Avenue apartment style...rising rents are forcing artists and intellectuals out of the heart of the district to the waterfront fringe or away from the Village altogether...In 1922, artists had organized to deal with the rent problem and were blaming bourgeois intruders for causing rents to rise. According to the 'chairman of the rent committee of the American League of Artists': '...Rents have been multiplying chiefly, it is alleged, by the competition of bourgeois people who know nothing of art, but like to wear flowing ties and live in the midst of temptations.'"

Here are the articles we worked on:

Note to researchers: When you write an article, please tag it with "gentrification" and "gentrification editathon 2". Then it'll show up here for everyone to see. :]