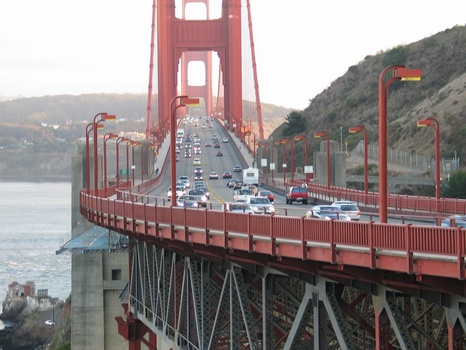 Golden Gate traffic on a Friday evening as viewed from the Northern Vista Point.

The Golden Gate Bridge, built in 1937, is one of the most famous suspension bridges in the world. The bridge was designed by Joseph Strauss. Beneath the San Francisco span of the bridge is the National Historical Site, Fort Point.

The Golden Gate Bridge was also declared as one the the Wonders of the World by the American Society of Civil Engineers.  The road on the Golden Gate Bridge is US Route 101. The bridge can also be traversed on foot, or by using Golden Gate Transit buses. As of January 2010, the cash toll for southbound two-axle vehicles is $6 ($5 with FasTrak). The northbound route is free, so though you get charged to enter San Francisco, the city is always happy to see you go.

Although Jospeh Strauss was the chief engineer in charge over the bridge project, he actually was unfamiliar with the cable suspensions deigns and more engineers were brought onto the project. Leon Moisseiff, who designed and was main engineer and builder of the Manhattan Bridge in New York City, constructed the final design of the Golden Gate Bridge. Iriving Morrow who although is not very people in architect, designed the shape of the towers, color schemes as well as the decor surround the bridge (signs, railings, walkways, etc.) The iconic orange color, also known as the international orange, was originally only used as a sealant for the bridge but then was kept as the final color to enhance the surrounding and complement the area. Originally, the color of the bridge was supposed to be black with yellow stripes for it to be easily seen when passing by the U.S. Navy.

The original cost of the project was over $35 million dollars, and was actually $1.3 million dollars under the project budget. The project was finished and opened to the public on May 27, 1937. In 1928 the Golden Gate Bridge was authorized by California Legislature. After the crash on Wall Street, the funding was unable to be raised to start the construction so it lobbied for $30 million by bond measure. These bonds were approved in November of 1930 by the votes of the counties surrounding the bridge. The budget at the time was $27 million but the bonds were unfortunately unable to sell until 1932. The founder of Bank of America in San Fransisco, Amadeo Giannini, bought the bonds in order to help the local economy.

​The Golden Gate Bridge is an Iconic golden stop in San Fransisco. Popular with pedestrians, bicyclist alongside the bridge with walkways across the entire side. Bridge Pavillion was built for a visitor center and holds a gift shop, The shop opened in 2012 just in time for the 75th anniversary celebration. Under the bridge is home to sea lions and bobcats and other variety of wildlife.

Unfortunately, the Golden Gate Bridge is the second most used suicide site of the world. The bridge deck is about 75 meters above water. Due to this, the impact of height of the fall, jumpers usually die from the impact of trauma. About five percent of the jumpers do survive the fall but drown or die from the cold water of the pacific. In 2017, construction suicide barriers began installation. The cost of this project is $200 million dollars and will take four years to complete. The bridge does have suicide prevention sigs and telephone available (connects to crisis hotline) on the bridge but the City of San Fran is taking the next steps to prevention. 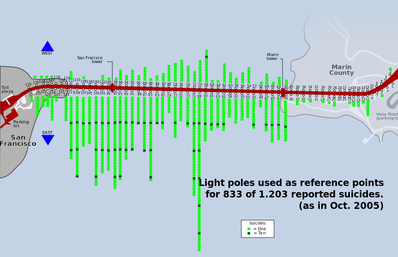 Someone jumps off the bridge to kill themselves about once every two weeks, despite the suicide prevention measures like signs, cameras, railings, patrols, and the closure of the bridge to pedestrians at night. Eric Steel's documentary "The Bridge" features chilling footage of people jumping along with interviews of friends and family members of jumpers. Update 10/11/08- Friday, directors of the bridge transportation district voted to hang stainless steel nets from the sides of the world-famous span to thwart jumpers. they'll hang 20 feet below the bridge and extend about 20 feet out to each side.

View from the top 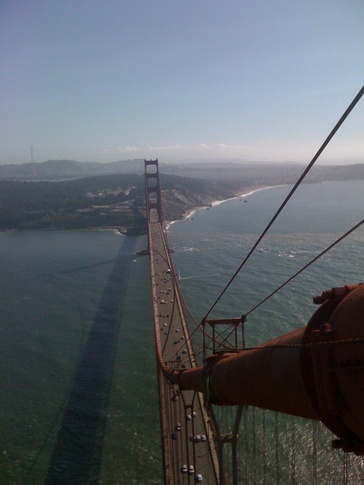 On May 27, 2012, Golden Gate bridge celebrated its 75th anniversary. There was a festive mood filled with activities, music and fireworks. 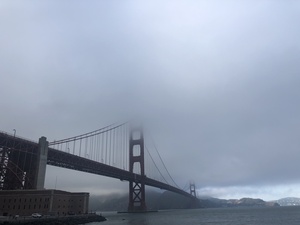 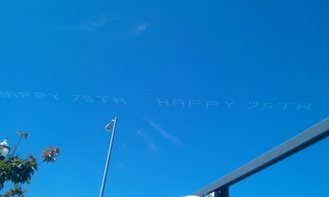 Airplanes spell out "Happy 75th" in the sky. 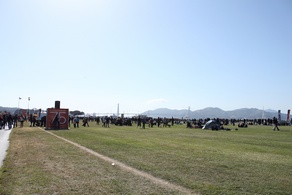 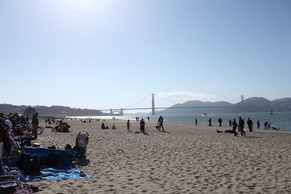 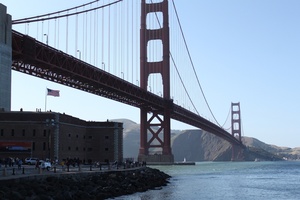 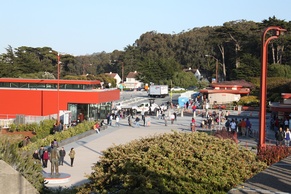 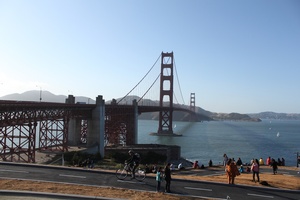