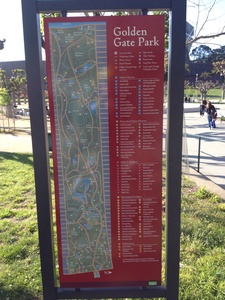 A map of the park showing amenities.Golden Gate Park is home to several gardens and museums:

Lots of wild animals and native plants can be found at Golden Gate Park. Its ponds hold turtles, fish, ducks, more ducks, and plenty of flies. The land has squirrels and fun insects. Visitors may occasionally see native quails, too.

In September, the park's wild blackberry bushes give fruit.

There also are several statues and memorials in the park:

Golden Gate Park is a great place to host a picnic. There are two types of picnic areas there: general and premium. Most of the sites are general, which cost $27 to rent for the day. There are only two premium sites, which cost $55 for the day. You can reserve an area by calling the Recreation and Parks Department's Permits and Reservations Division at (415) 831-5500. Spots fill up quickly, so be sure to reserve at least a month in advance.