A herd of American Bison have lived by Spreckels Lake in Golden Gate Park since the 1890's.

In 1984, then-mayor Diane Feinstein's husband decided to give her a whole bunch of buffalo for her birthday.  The buffalo in the paddock today are descendants of those same gifted buffalo.  In December of 2011, Dick Blum, Feinstein's husband, helped pay for new buffalo and donated $50,000 to help repair the paddock.

During the 2014 Bay to Breakers, some naked (and presumably very drunk) guy jumped into the buffalo paddock and got arrested. 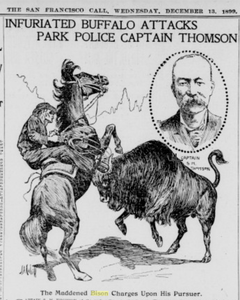 Dramatic drawing of the buffalo escape from The San Francisco Call (1899-12-13). Screenshot thanks to Burrito Justice.Well, at least in 1899 they did.  During an attempted move of the buffalo from an old enclosure near Stow Lake, Police Captain Thomson was attacked as two buffalo escaped:

"..of the park police v had a narrow escape yesterday from a fearful U death. Mi was attacked by an Infuriated bull x^z^ buffalo that tossed him and the horse upon which he was mounted, attaching him again and again as he lay helpless on the ground, after It had disemboweled his steed. The timely arrival of assistance undoubtedly caved bin from similar fate. The accident was the result of an attempt to tenant the new buffalo paddock in Golden Gate Park with some of the denizens of the old enclosure near Stow Lake. Captain Thomson and five mounted men started early in the morning to make the transfer. Before noon th«y had managed without trouble to get three of the bulls into the new paddcck, which Is situated close to the water tank on the bicycle path. After luncheon the two remaining: bulls were taken out of their corral and started along the rood for their new quarters. Although one of the buffaloes had manifested signs of uneasiness several times on the way, Captain Thomson and his men had almost reached the water tank without mishap. One of the men, Walter Jansen, had been sent ahead to open the paddock pate and Thomson and the others started to drive their charges toward it. Both buffaloes broke into a run. the policeman hard after them, and one of the animals got through Into the paddock. The other, by reason of the fact that the gate was not opened wide enough to suit him, passed It and ran snorting down the road toward the beach." (via  San Francisco Call, Volume 87, Number 13, 13 December 1899, thanks to Burrito Justice for the research!)