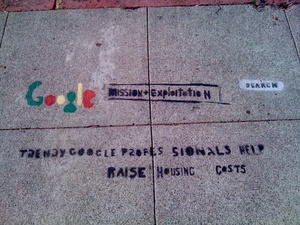 An anti-google gentrification sidewalk bomb at 18th and Dolores (appeared 2008-7-16).

A fair number of Google employees live in the city and commute to their Mountain View campus daily. You may have seen the legions of Google shuttles around the city. More information on the Google shuttle program. Google also has a San Francisco office in the Financial District on Spear street.

Many contend that Google is a strong force of gentrification in the city, particularly in the Mission District.

An unidentified person flips off a Google streeview car at Valencia and 22nd Street. Screenshot 2014.

Some shuttle drop off points

A Google shuttle dropping off employees at 24th and Valencia. (2007)