Google runs a private shuttle fleet that ferries thousands of Google employees between San Francisco and Mountain View every day. Often though when people say "Google bus" they're referring to private (usually tech) company shuttles and their increasing dominance in SF. 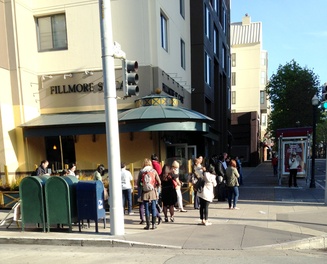 A group of 20+ Google employees wait for a Google shuttle bus on Fillmore Street. Photo 2014.

Why is this a big deal? 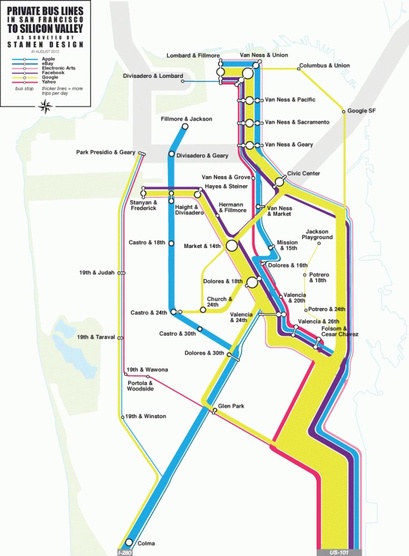 In 2012, Stamen Design tracked the movements of tech shuttles and created a map of them - a map that was never created or released by the companies themselves who keep routes and stops secret. [from SFist]"Critics decry the massive amount of space the buses take up and that they often park for extended periods of time in public bus stops. But perhaps their most stinging  critique is that they symbolize, and perhaps even worsen, the widening divide between the city’s rich and poor." [source] The busses form an alternate private public transit system that's not accessible and doesn't benefit all of San Francisco residents. Their increasing dominance in the city, the fact that in many parts of the city at certain times, they seem to pass by every few minutes, is a constant reminder of the San Francisco that's being created with the influx of wealth and capital (primarily concentrated in the tech industry) - a San Francisco that's not for all of its residents.

"Studies show that in areas around the shuttle stops, rents fly high and displacement is rampant." (from SFBG)

Check out this map of evictions and shuttle stops made by the Anti-Eviction Mapping Project. They found that no-fault evictions increased 42% between 2011 and 2012 and 57% between 2012 and 2013. 69% of No-Fault Evictions each year occurred within four blocks of known shuttle stops.

In 2013 and 2014, there were (and continue to be) a number of anti-gentrification protests that took the form of protests against Google busses, usually blockages of the Google bus's path.

"This past January [2014], the San Francisco Municipal Transportation Agency (SFMTA) voted to approve a pilot program that would allow private shuttle operators, including a host of tech companies, to stop in designated Muni bus areas for a fee of $1 per stop, per day." (from SFBG).

"The $1/stop deal replaced the “handshake agreement” where the tech buses could do whatever they wanted while the SFMTA gazed vacantly into space, which is its forte." (from SFBG