The Hyatt Regency San Francisco is the large terrifying building that you see when you get out at Embarcadero BART. "Welcome to San Francisco!" it says.

This 1970s architectural gem was designed by architect John Portman. It's a part of the Embarcadero Center complex. 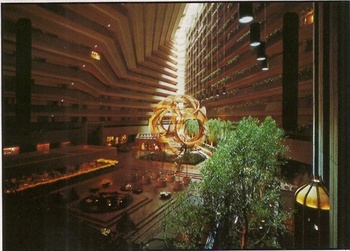 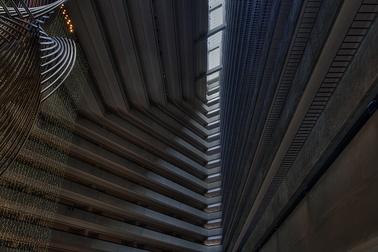 If you go inside, it may not seem like it's much to look at, but if you take the escalator up two levels, you may find yourself in for a treat - it's a gigantic brutalist atrium with a terrifying huge sculpture/fountain in the middle! This area is open to the public, so feel free to explore. These days the atrium is dark, fairly oppressive, and mostly devoid of plant life, but apparently it was much lusher when the hotel first opened in 1974. It was probably meant to make you feel like you were in an outdoor plaza (certainly the tiling on the floor would indicate as much - it's the same outdoor patio style tile pattern that you'll find in the rest of the Embarcadero Center shopping mall). Wikipedia says "Portman is praised for his "cinematic"interiors artfully relating interior space and elements to the individual. In the 1960s and 1970s the placement of such buildings in America's decaying downtowns was considered salvation of the city centers, but contemporary city planning is highly critical of such insular environments that "turn their back" on the city streets.[2]" Apparently John Portman repopularized the idea of having large hotel atria and included the feature in many of his designs. This atrium is the largest hotel atrium in the world (42k sqft)! 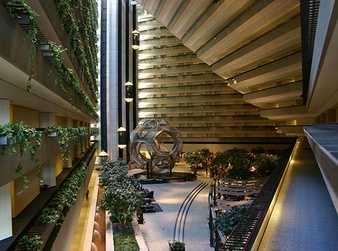 Another one from 1974 because it looks so much nicer! [source]

As of 2014, this hotel is on the "please patronize" list on the Hotel Workers Rising! site.

Workers at this hotel are represented by UNITE HERE Local 2.

There were many protests in front of this and other Hyatts in SF between late 2009 and the first half of 2013. This was part of a national campaign organized by UNITE HERE which represents workers at many Hyatts around the country. UNITE HERE also called for Hyatt hotels (including this one) to be boycotted during that time. This was all because UNITE HERE's contract(s?) with Hyatt expired in 2009. Although new contracts were agreed to in a number of places, workers and management in hotels in SF (and a few other cities) were some of the last to come to an agreement. Finally, on Jul. 1 2013, UNITE HERE and Hyatt announced that they had reached an agreement at the national level. The agreement included new contracts to last until 2018 and a new framework for negotiations. Here's the press release. Here's a short article in The New York Times (originally from AP) about the issue (it mostly echoes the press release). And here's a longer piece about it from Labor Notes.

Here's a timeline of some of the protests that have taken place at this hotel between 2009 and 2013:

2010: "to protest the hotel chain's efforts to press [staff] even harder despite a significantly improving financial picture for the hospitality industry generally and the Hyatt chain in particular." [People's World, 2010-06-11]

Jan 2011: Picket line protesting the lack of a contract (see above for more background). Here are some photos of one day on the picket line when participants at the Yoga Journal SF conference (which was taking place at the hotel despite the boycott) joined the picket line.

Feb 2011: Protests about the lack of a contract. The previous contract expired in 2009 and no new contract had been signed. At that time, new contracts (that had also expired in 2009) had already been signed with similar hotels (like Hilton and Starwood). [2011-02-11: "Workers Across Country tell Hyatt to Negotiate Fair Contracts, Stop Sweeping Housekeeper Injuries Under the Rug" unitehere2.org]

April 2011: Here are photos from a rally that passed by this hotel. It was being boycotted at the time. Here's an article about the April protests.

September 2011: In 2011, there were protests at this hotel as part of nationwide Hyatt protests. Workers were demanding the right to strike at a given hotel in solidarity with workers striking at other hotels and were still looking for a contract -  [source:Hotel Workers Rising! press release, 2011-09-08].