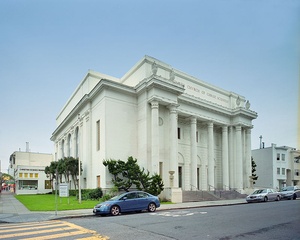 300 Funston. (image is public domain, got it from Wikipedia)Once apon a time there was this crazy rich dude who said "I think I want to back up the Internet. Continuously." So he did. The result is archive.org, home not only to the Internet Archive, but also the Prelinger Archive.

They are based in the Richmond at 300 Funston Avenue in a very cool building that used to be a Christian Science Church.

Sometimes they have public events. They're usually announced on their blog. 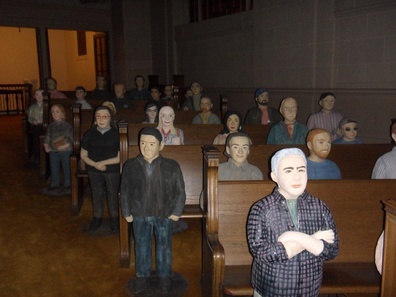 Photo by Eric Fischer, CC-BY [link] There's a large auditorium in the center of the building with pews (because the building used to be a church). In one part of the auditorium the pews are filled with clay statues of people who have dedicated at least three years of service to the Archive:

"The Archive commissioned a fine arts sculptor named Nuala Creed to make statues representing people who have dedicated at least three years of service to the Internet Archive.

To date, Creed has made 100 statues, and they reside in the Great Room at the Archive and are scattered among the old church pews.

The Internet Archive's founder, computer engineer Brewster Kahle, was inspired to start the project after he went on a trip to China and saw the terracotta warriors, which depict the armies of the first emperor of China." [Business Insider]

One of the statues is of Aaron Swartz.

From Wikipedia: "On November 6, 2013, the Internet Archive's headquarters in San Francisco's Richmond District caught fire, destroying equipment and damaging some nearby apartments.[17] According to the Archive, it lost:[18]

The non-profit Archive sought donations to cover the estimated $600,000 in damages.[19]"