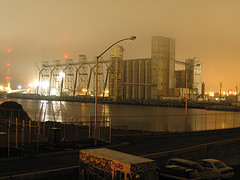 Islais Creek ran through Butchertown and was so full of sewage and garbage that in the 1870s it was known as Shit Creek. It was channelled into culverts and paved over. It starts near Glen Canyon Recreational Area, around Portola Drive; then follows Highway 280 north and west; then is shunted into the Islais Creek Channel at Third and Cesar Chavez streets, and flows into the bay at Bayview. In 2001 a sewage line rupture caused by MUNI construction polluted the underground Islais Creek Channel with sewage, which still is a problem as it flows directly into the bay.

The name of the creek is possibly from an Ohlone word "islay" meaning wild cherry tree.

Marshes surrounded the area of the creek up till the turn of the century. The marsh was filled in gradually, especially after it was used as a dumping ground for debris from the 1906 Earthquake.

Back to Historical Creeks