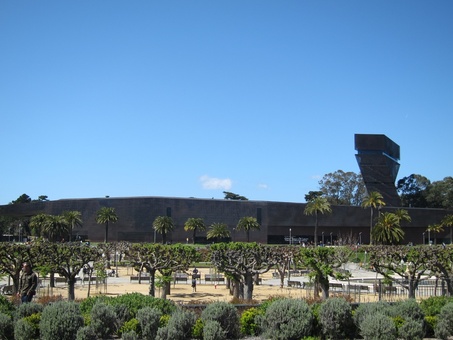 The de Young, viewed from California Academy of Sciences.

The de Young Museum is a fine arts museum situated in San Francisco's Golden Gate Park across from the California Academy of Sciences. The permanent collection consists of both American art (17th-20th century) and native art from America, Africa, and Oceania.

The contemporary design of the current museum building contrasts with the traditional art of its collection. Construction of the new building was completed in 2005, replacing the old structures which were damaged in the 1989 Loma Prieta Earthquake. The copper-clad exterior of the new building is meant to blend into the natural setting of park, eventually turning green in color (a la the Statue of Liberty).

Admission is free the first Tuesday of each month.