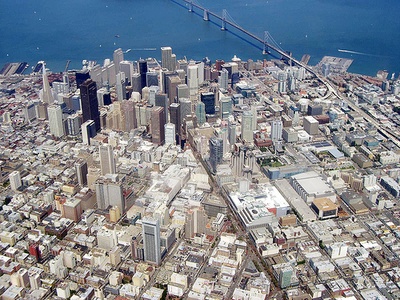 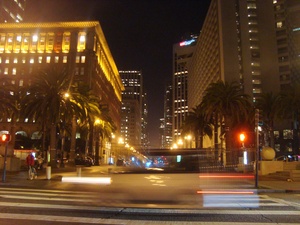 View up market from the Ferry Building (photo by mk30)Market Street bisects the densest part of the city — or, more accurately, the city is densest in the areas adjacent to Market. It stands out on a map because it lies diagonally in a city of streets facing north-south or east-west. The story goes that Jasper O'Farrell purposely aimed Market Street at Twin Peaks because he wanted people to keep in touch with the natural beauty of the land; he planned the city so that buildings would not block out the view of the highest mountain.

The neighborhoods near Market Street, clockwise from the north, include SoMa, the Mission, the Castro, Duboce Triangle, Hayes Valley, the Tenderloin and the Financial District.

Some city officials have been considering closing off a two-mile stretch of Market Street between Octavia and the Embarcadero to civilian traffic, in an attempt to reduce traffic on the thoroughfare. Under the plan, only Muni buses and trains, and possibly taxis, delivery vehicles and cars with disabled placards would be allowed to use this section of Market. Supervisor Chris Daly is urging Mayor Gavin Newsom to consider the proposal, especially in light of Newsom's plan to incite people to exercise by closing off 6 miles of the Embarcadero and Third Street on two Sundays in the summer of 2008. Newsom will need plenty of convincing, according to the mayor's spokesperson, Nathan Ballard: "It's an intriguing idea, but this isn't a very smart proposal. Chris Daly is not exactly the president of Mensa."

The Market Street Association is worried that businesses along Market Street will suffer like many — including several large department stores — did during a 17-year closure of Chicago's historic State Street. After State Street was reopened to civilian traffic in 1996, prosperity returned.

Some proponents believe that reducing motor vehicle traffic will make the road safer for riding bicycles, which comprise over half of all traffic on Market during commute hours, according to a June 2008 survey. The survey revealed that bicycles made up 52 percent of traffic traveling east between 8 and 9 am on Thursday, June 12, 2008.

Such a closure of Market Street is not a new concept; it has been considered by several previous San Francisco administrators, including mayor Willie Brown.

More information about this proposal can be found in a San Francisco Chronicle article here.

Why is Market Street set at an Angle? 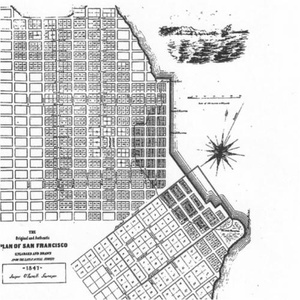 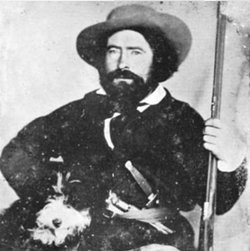 By the time people tried to set out a sensible grid for the growing town, the landowners had other ideas...

“In 1839, when San Francisco was Yerba Buena, a Mexican outpost of cabins and tents huddled between a bayside cove and some chaparral-covered hills, the authorities asked...Jean-Jacques Vioget, to lay out a rudimentary grid of north-south and east-west streets around a plaza (now Portsmouth Square)...

Landowners didn’t like the new Market Street
(at least according to quotes of Forgotten Pioneers, by T.F. Pendergast)

“When the engineer had completed his map of Market Street and the southern part of the city, what was regarded as the abnormal width of the proposed street excited part of the populace, and an indignation meeting was held to protest against the plan as wanton disregard for rights of landowners; and the mob, for such it was, decided for lynch law.

A friend warned O'Farrell, before the crowd had dispersed. He rode with all haste to North Beach, took a boat for Sausalito, and thence put distance behind him on fast horses in relay until he reached his retreat in Sonoma.

He found it discreet to remain some time in the country before venturing to return to the city.”