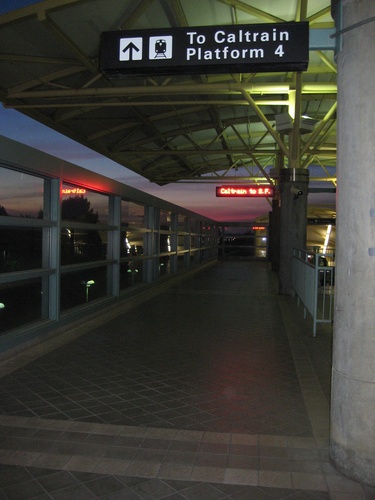 The concourse level (May 2008) Millbrae Intermodal Station is a transit hub in the city of Millbrae. It is the BART system's southernmost station on the Peninsula, and serves as a transfer station for Caltrain passengers. You can also catch a number of SamTrans buses there.

The northbound Caltrain platform is right next to the BART platform (they're separated by a fare gate). Since BART trains come and go more often, it's pretty convenient to go from Caltrain to BART, and you can more easily get downtown to Union Square or to the Mission. Note that even though there are three tracks for BART, only one of them (the closest to Caltrain) is actually used.

The transfer to and from a southbound Caltrain is more difficult; you must head upstairs via an escalator, elevator, or staircase, and cross the Caltrain tracks on an elevated walkway. (This is also how you can access the BART parking garage and SamTrans buses).

Note that outside of peak commute hours, Caltrain runs at most once an hour. You may be waiting a long time for your train. However, many Caltrain express trains stop at Millbrae. Check your schedule.

The Millbrae station is 13.7 miles away from the Caltrain terminal in San Francisco and is in Caltrain's fare zone 2. It costs $4.75 to ride Caltrain between Millbrae and any of the three San Francisco stations. If you are buying a Caltrain ticket, make sure you get a Zone 2 to Zone 1 ticket. Do not say "I am going two zones", press the 'Zone 2' button, and purchase a zone 2-2 ticket by mistake.

It will cost $3.90-$4.25 to ride BART into San Francisco (depending on your stop). If you start at Millbrae station is cheaper to take BART directly into the city, but if you are transferring from Caltrain, it's about the same price to stay on an extra zone ($2) and transfer to the light rail downtown ($2), and even cheaper if you don't transfer.

BART will also sell you airport parking in the Millbrae parking garage.

Samtrans has been accused of using the Millbrae station for money laundering with BART related to low ridership on the SFO bart extension and cost overruns on the Warm Springs extension.

Transferring from Northbound Caltrain to BART seems to be a bit of a scam if you are using a clipper card. There are a few somewhat hidden tag-off terminals in the area that someone with a clipper card must use before tagging on to BART. Tagging directly onto BART will not refund a portion of the Caltrain ticket - usually costing the rider an extra $4.00 for the trip.