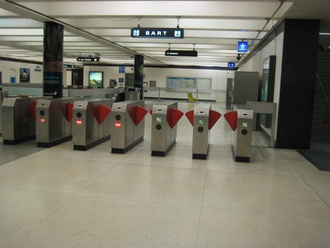 Yup.The Montgomery station is the second-northernmost BART station in San Francisco (the northernmost being Embarcadero). Riders passing through the northern end of the concourse level are typically greeted by the music of either a clarinetist, or, less frequently, a guitarist playing Johnny Cash covers (with a surprisingly similar voice!).

This station is host to a Peet's Coffee and a flower stand, which can both be found on the southern end of the concourse level.