The Muni logo, which is fairly kick ass.

Logo from a bus 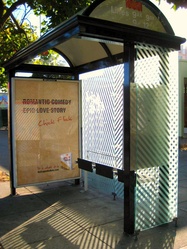 Transfers typically last 90 minutes from the time of payment, but starting at around 8:30 they're good for the rest of the night. Passengers carrying a Fast Pass may travel on any Muni bus, train, trolley or cable car at no additional cost.

Throughout the Muni system, buses are numbered while trains are known by letters of the alphabet — except for the letter X, which represents an express bus line. 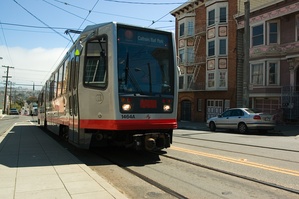 The Muni rail lines (known as Muni Metro) are as follows:

The rail lines go both above and below ground.

On April 11, 2007, the first diesel hybrid electric buses appeared on the streets of San Francisco in an effort to reduce overall Muni emissions by 30% by the year 2012. The city also plans on its fleet becoming 100% free of greenhouse gas emissions by the year 2020. The city bought 86 of these buses from Daimler-Chrysler and planned to have the third-largest hybrid bus fleet in the United States by the end of July 2007. These buses are different from the Toyota Prius hybrid car — Muni's buses use series hybrid systems, while the Prius runs on parallel hybrid technology. You can read more about series versus parallel hybrid systems here. More information about Muni's transition to hybrid buses can be found here.

The city hopes to install a new underground rail running from the Caltrain terminal at Fourth and King streets, extending west along Fourth, stretching north along Stockton Street and coming to an end at Clay Street. This will add four new stations:

The San Francisco County Transit Authority is working on a plan to increase bus reliability along Geary Boulevard, the busiest street in the northern part of the city. The plans began with the 2003 passage of Proposition K to build BRTs in San Francisco. With a planned phase 1 start date of the year 2011, the SFCTA has been studying the feasibility of adding a bus-only lane along the middle of Geary since 2004. Though there aren't any current plans to include a light rail on Geary (due to a lack of funds), the BRT lane will most likely be built with the possibility of a future light rail in mind. Read more about the city's plans for the Geary BRT plan here. The Greater Geary Boulevard Merchants and Property Owners Association has an anti-Geary BRT site.

Like with the Geary BRT study, the city is looking into installing a two-mile-long, bus-only lane along the busy thoroughfare Van Ness Avenue as a result of Proposition K. Construction may begin as early as 2009, with service introduced as early as 2010 — if the project is found feasible; the SFCTA has been coordinating the study with Caltrans to research whether the plan will work. More info on the Van Ness BRT study can be found here. 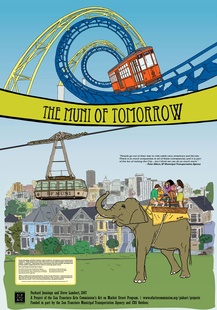 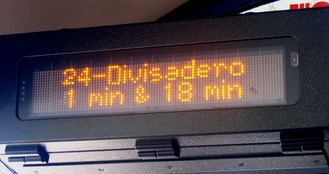 It is kind of wasteful for the non-moving devices to also use wireless to get the information, just one more reason why there should be a municipal wired (fiber?) data network. Stop unnecessary radio pollution! —NickSchmalenberger

Dude, it's like, tens of bytes worth of traffic, versus digging up the street to install fiber. And wireless is much more resilient to the errant backhoe. Wireless for eva.