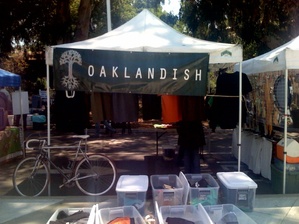 We don't need SF-is-awesome shirts because SF actually is awesome.

Oakland lies across the bay from San Francisco. It has its own local wiki: Oakland Wiki. The city consists of diverse communities, ranging from urban neighborhoods in the lowlands to affluent homes in the hills.

Oakland is the major shipping port for the San Francisco Bay Area, and its airport hosts many of the low-cost airfare carriers to the region.

The Oakland City Council has sometimes killed crazy awesome ideas from the San Francisco Board of Supervisors, such as re-naming the Bay Bridge the Emperor Norton Bridge.

You can spot an Oakland resident by their choice of Oaklandish apparel. Rumor has it, if you wear Oaklandish and don't live in Oakland you're liable to get your ass kicked.

Sometimes called "the town" (in contrast to "the city").