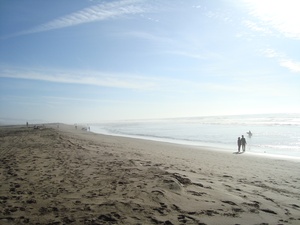 Ocean Beach bounds the San Francisco peninsula on the west coast, facing the Pacific Ocean. It is a large sand beach, and is host to some San Francisco landmarks, including the Cliff House, Sutro Baths, and the Camera Obscura. While it is a beautiful beach, the water tends to be quite chilly, and the beach is often fogged in. For a less foggy alternative, those with cars sometimes venture to Stinson Beach.

Another pleasant benefit of Ocean Beach is that it's right by Land's End - cliffy, foresty, walks.

Sutro Heights and the accompanying Sutro Baths are located at the north end of Ocean Beach.

Ocean Beach is easily accessible via the Muni 5 bus.

Ocean Beach has dangerous rip currents that can sweep a person out to sea. Swimming is not advised and children should not go wading. A record 7 people lost their lives here in 1998. There have been several Great White shark attacks at this location.

Want to drink at the beach? Lots of people do! It's against the law, though. The best place to get booze is the Safeway at 850 La Playa St.

There are also lots of neat things you can find on the beach and on the rocks and boulders around it. On the rocks on the north side of the beach you can find musselsAdd a caption
, live barnacles, snails, seaweed, crabs, birds, and more. 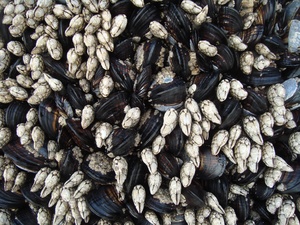 mussels and barnacles (by mk30) 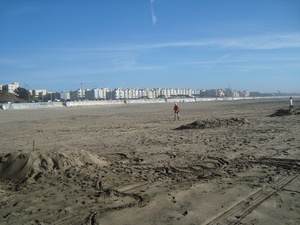 expensive beachfront houses that are usually in the fog (by mk30) 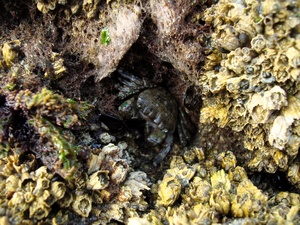 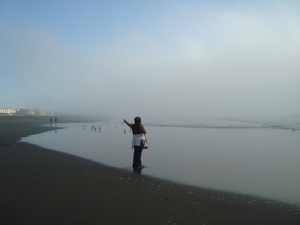