Patricia's Green is a public space spanning Octavia Boulevard between Hayes Street and Fell Street. It is host to a park, picnic tables, a playground, and a periodically changing art space. Current art exhibit is "Future's Past" by Kate Raudenbush. Sculpture looks like an ancient Mayan ruin.

Patricia's Green is named for Patricia Walkup, a local activist who volunteered her time for many years to fight neighborhood crime, and co-led a campaign to tear down the part of the Central Freeway that ran through Hayes Valley. The destruction of the freeway has spurred gentrification (also, Gentrification) which has revitalized the neighborhood, and has made one of the trendier sections of town with an eclectic mix of boutiques, high-end restaurants, and hip stores on Hayes Street 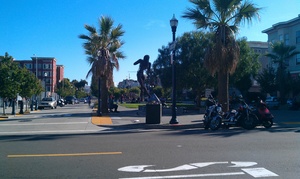