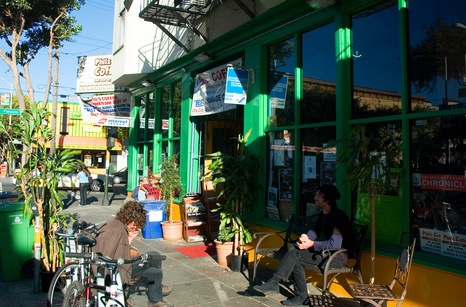 The flagship Philz Coffee location at 24th and Folsom.

Inside the Mission Philz on a Saturday afternoon, April 2008 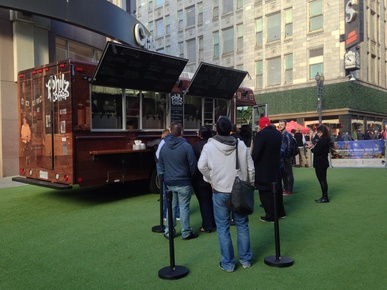 A Philz Coffee cart seen during the Winter Walk SF in Downtown. Photo 2014-12-27.Delicious specialized coffee blends. Each cup is prepared individually — not a french press but rather just hot water + filter directly into the cup. Phil, the owner, has been making coffee since he was eight years old.

The Mission location has elaborately painted walls, tables, hippietastic dusty skanky old couches you can put your feet up on, lots of photos and paintings of Phil, and green plants throughout the store. Phil himself is quite a character!

They have WiFi. Internet-usage machines in the back (at least at their Folsom location).

Philz has expanded a great deal from the flagship Mission store, with locations in the Castro, SOMA/Mission Bay (Near Caltrain/Ballpark), Civic Center (Turk & Van Ness), Palo Alto and San Jose. A Berkeley store has been threatening to open for some time. None of the satellite Philz have the culture of the main store, unfortunately.

There was a Philz Coffee in the Castro at 3901 18th Street for a while. They closed up some time in 2007 but then re-opened a new location in the Castro that's kinda built into a laundromat.

Up until July 2005 Philz sold liquor and cigarettes. They used to be called "Phil's Coffee" but changed their name upon the suggestion of Phil's daughter who said it would "make it different." The mission location has been here for years and years — it was originally a corner store called Gateway Market. After talking with residents and realizing the block didn't need another corner store Phil changed the place into a coffee shop.

2007-07-03 19:18:50   For some reason — maybe it's the laid-back atmosphere and the kids my age — Philz in the mission reminds me of Portland. Absolutely delicious coffee. I noticed one trick they use to make it taste good is they shake up the cream before they pour it into some coffees, giving it more texture. —PhilipNeustrom

2007-08-01 10:54:46   Phil'z coffee is effing delicious. I had a cup of the clover coffee yesterday and Phil'z is weeeehy better. I'm not sure if I believe in that clover machine business. Individually prepared drip coffee is pretty damn tasty. —ArlenAbraham

2007-12-10 17:49:12   I don't know why, but I find Philz coffee pretty horrible-tasting. It was my local coffee shop when I lived on Folsom, and I couldn't bear to go there, because I'd always be sick afterwards. It might have been the ultra-cream. —dannyobrien

I'm not sure why, but I always feel sick after drinking the coffee here, too. It's probably the cream. —PhilipNeustrom

2007-12-10 18:32:45   The coffee is strong and okay, but I don't love it. I am also suspicious that all the different kinds are really the same. All just tastes like "strong slightly muddy coffee with weird sprig of mint in it". —lizhenry