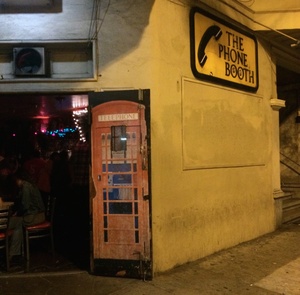 Phone Booth is a tiny dive bar at 25th & South Van Ness. They have a pool table and an excellent jukebox. There's an interview with the owner about the jukebox.

This SF Gate article calls it a "gray bar": "The regulars are young queer and straight people with messy hair and shaggy clothes, who come in small groups (big groups wouldn't fit) to experience the neighborhood bar feel -- even if they don't live in the neighborhood." SF Weekly says "At the nexus of hipster bar, queer bar, and neighborhood bar lies the Phone Booth."

The name derives from the nearby 25th Street Telco Building. A website called Party Earth says "Open since the 80s, the name stems from a long-gone Pacific Bell office that stood across the street, when the regulars were comprised of mostly gay company men in need of a casual after-work drink." But the telco building is still there, so who knows how accurate that whole sentence is.

Here's a video about the Phone Booth.

Writers seem to enjoy talking about this place.

It shows up in Kate Losse's 2012 book The Boy Kings, about working at Facebook: "It was a dirty, hip place, lit all in red and purposefully seedy, the scene of many Mission love crimes, I was sure...In this bar, people could even smoke due to some archaic loophole in San Francisco smoking laws, adding to its stench of authenticity...The bar filled with taut-muscled gay men in leather jackets, like some movie version of New York in the 1970s."

In Time Out San Francisco: "This place is about the size of an actual phone booth, and its tiny dimensions often make it appear more popular than it is, but most drinkers are too bombed on the cheap booze to notice."

From SanFrancisco.com: "Intellectual ennui and surges of testosterone mix wildly at this refurbished Mission hang out. The jukebox is full of Nirvana, Weezer and the Yeah Yeah Yeahs and the patrons are full of cold San Francisco Anchor Steam. Cute boys, cute girls, fluid sexuality."

...or Mission Local: "The Phone Booth is unique because it’s one of the only spots in town where you can still smoke inside, but other than that it’s just like every other dark little dive in the Mission. The bartenders are rude, the drinks are cheap, the music is annoying, and the people are drunk."